Many friends who have just contacted Hanfu will find that there are many places in Kimono and Hanbok (Korean clothes) similar to Hanfu. This article takes you to know the differences between Hanfu, Kimono, and Hanbok. 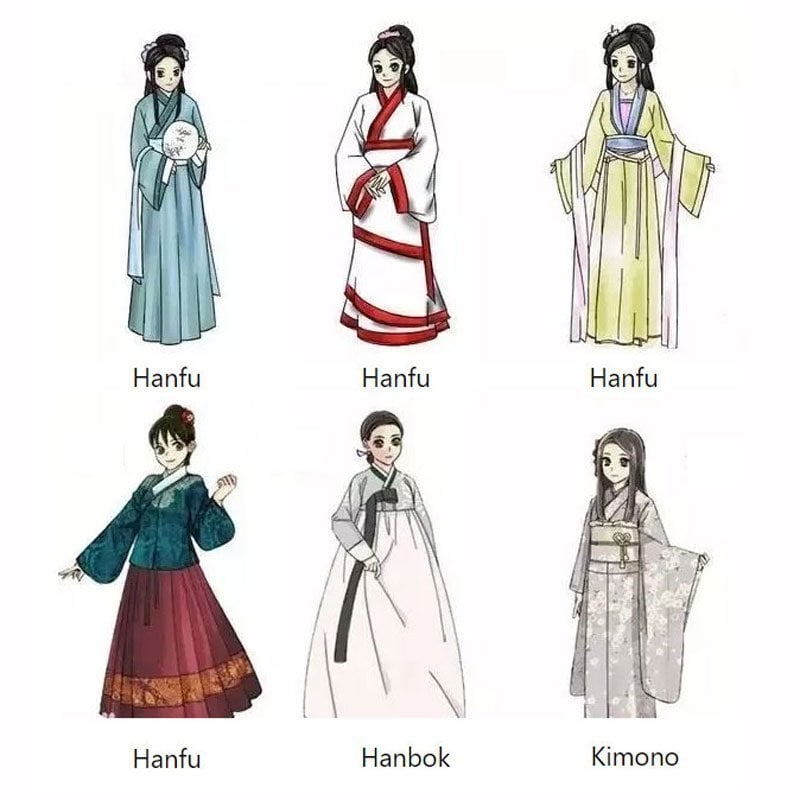 During the Nara period in Japan, the period of China’s prosperous Tang Dynasty, Japan sent a large number of sent envoys to China to study culture, art, and law systems, including the clothing system. In the early days, the kimono was a replica of the Tang suit. At that time, they also imitated the Tang system and issued a “clothing order”. So far, Japan still refers to the kimono as “Wu suit”, which means clothes from Wudi (now Jiangsu and Zhejiang) in China. Although the kimono came from the development of Hanfu, it has developed its own national characteristics after a long period of history. 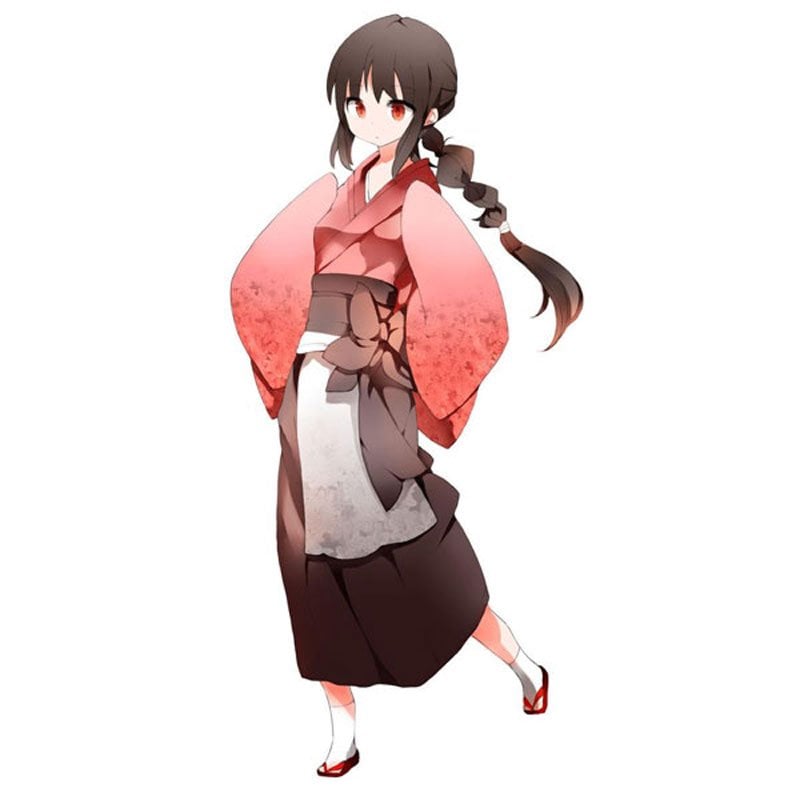 The Korean peninsula has long regarded China as the sovereign state, so its clothing characteristics have also changed with the changes of Chinese dynasty styles. After the establishment of the Korean dynasty, North Korea, the kingdom of the county, enjoyed the right to be “Cifu(Emperor’s reward)” by the Ming emperor. 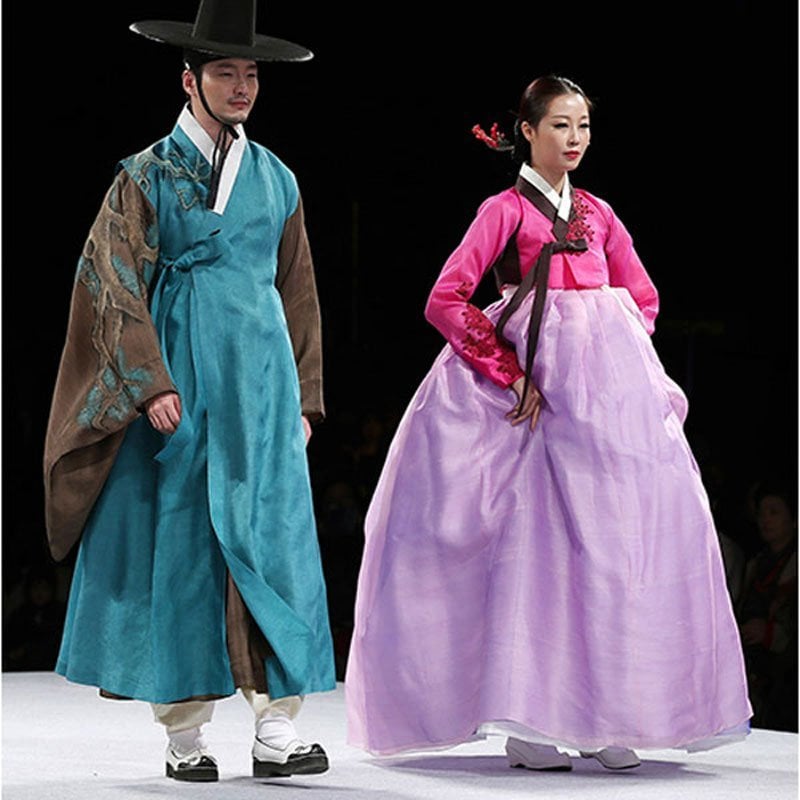 The differences between Hanfu and Hanbok (explained in detail)

There’s been a lot of discussion on Twitter lately about Hanfu vs Hanbok, along with #Hanfu challenge and #Hanbok challenge. So what is the relationship between the two historical clothing costumes?

Ancient china was really influential, influenced a lot of its bordering nations. In areas such as culture, food, architecture, clothing, etc. So it’s completely normal for the Hanbok to resemble Hanfu in many areas.

Gojoseon was an ancient Kingdom in the Korean peninsula. It was first mentioned in Chinese texts in the year 700 BC. Sources relate that in the 12th century BC, Jizi (箕子), a Chinese nobleman belonging to the Royal family of the Shang Dynasty (16th-11th century BC), immigrated to the Korean peninsula, and founded Gija Joseon (箕氏朝鲜, 1160-194 BC). As far back as the North-South states period, which existed around the same time as the Tang dynasty in China, much of the Korean peninsula had already adopted the round collar style of clothing, which they called gwanbok to be used as a formal attire worn by court officials.

Cifu to Joseon Dynasty in the Ming Dynasty

In ancient China, Yi (clothing) & Guan (crown) have always been regarded as an important symbol of a country’s civilization, as well as an insurmountable outward expression of the hierarchical ritual system of the ruler and officials. The suzerain state showed appeasement, favor, and encouragement to the domain by Cifu on the domain so that the domain would serve the suzerain state more faithfully. This form of diplomacy has a long history in Chinese history and was also used quite frequently in foreign relations during the Ming Dynasty. The Ming Dynasty began to Cifu to the Korean Peninsula during the Goryeo period. After the founding of the Joseon Dynasty, King Taejo established the policy of “follow the Ming Dynasty’s clothes and forbidding the wearing of Hu clothes”, which pointed out the direction for the change of the Korean dress.

In terms of costume culture, the Ming Dynasty Cifu had a great influence on the Joseon monarchs and retainers to follow the Ming system and reform their own costume system. Compared to neighboring nations and countries, the Korean peninsula is the most influenced by China.

For the king of Korea and the princess and other royal personnel, the Ming dynasty is mainly bestowing Mianfu (冕服), Jiangsha robes (绛纱袍), jade pendant, jade belt, and other things, while for the envoy is to give general civil and military officials Zhaofu (朝服, a kind of formal dress) and Gongfu (公服, official uniforms), and according to their different official positions, but also to different grades of clothing. This ranking system of giving clothing has a clear impact on the development of the Joseon Dynasty clothing system.

2. Cifu provides a most intuitive form for the Joseon Dynasty to reference Chinese dress

The Ming Dynasty’s Cifu for Joseon Dynasty has gone beyond formal favors to be closely connected with cultural identity, gradually making the Chinese costume culture of the Ming Dynasty take root and grow in Joseon, integrating it into Korean costume civilization and becoming part of its national costume characteristics. The uniforms of the kings and civil and military officials of the early Joseon dynasty were similar, or even identical, to the Ming dynasty.

Figure 1 is the sitting portrait of Emperor Ming Taizu (in the collection of the National Palace Museum, Taipei), wearing the Changfu (常服) of the Ming emperor. The Ming emperor’s Changfu, instituted by Ming Taizu in the third year of the Hongwu (1370), the basic style is: Wusha Zheshang Jin (乌纱折上巾,), Pan-collar (盘领) narrow-sleeved robe, belt. Ming Chengzu in Yongle three years (1405) made changes to the emperor’s Changfu, the regulations: headwear a cap made of black yarn, folded upward, which is later called “Shanyi Guan (善翼冠)”; wearing a Pan-collar, narrow-sleeved yellow robe, robe body before and after and shoulders each woven a gold dragon; waist jade belt. Figure 2 is the costume of the king of the Joseon dynasty, King Taejo, except for the color of the costume, the style and pattern of the crown can be said to be identical, and even the attitude is extremely similar.

Figure 3 below shows the Changfu of officials in the Ming Dynasty. The Changfu of civil and military officials was formulated in the third year of the Ming dynasty (1370): generally a black cap on the head, a Tuan-collar (团领) robes, and a belt around the waist. The belt is different according to the official grade, different grades used different textures. In the early Ming Dynasty, there was no Buzi (补子) in the chest and back of the official costumes, and in the 24th year of the Hongwu Dynasty, the court made a new regulation on the Changfu of officials, all civil and military officials, regardless of rank, must add Buzi to the chest and back of the robes, civil officials with birds, military officials with animals, to show the difference.

In the Qing dynasty, there was no compulsory requirement for the Joseon dress, so the Joseon dynasty’s clothing remained in the Ming style and began to evolve on its own.
The style of clothing for the noblewomen of the early Joseon Dynasty was not the same as the traditional Korean costume we see today, but was basically the same as the Chinese Han women’s Ruqun (襦裙) system, which features a short Ru (襦), cross collar, wrapping the right side before the left, a white silk Huling (护领, collar protector), butterfly sleeves. In the early Joseon Dynasty, women still wore the white inner cloths of their own nation, so the cuffs were wide and the cuffs were short, but in the middle and late period, the butterfly sleeve pattern was gradually changed and it was also called the Tangyi (唐衣), and the butterfly sleeve is still used for traditional women’s hanbok today.

In the early Joseon Dynasty, women still wore the white inner clothes of their own nation, so the cuffs were wide and the cuffs were short. By the middle and end of Joseon, it was slowly changed to the butterfly sleeve style, which is known as Tang Yi,(唐衣), and the butterfly sleeve is still used for traditional women’s hanbok today. In the mid to late Joseon period, the women’s Tang Yi was used as a formal dress worn by a princess, noblewoman, and court attendant. It was made of silk satin, embroidered with a phoenix on the chest, with a curved hem, a slightly shorter front placket, and a back body about 30 cm longer than the front placket. The front lapel or sash is embroidered with gold motifs to create a magnificent atmosphere. Tang Yi is usually worn over the skirt. The color of the garment varies depending on the status and position of the wearer.

3. Influence on the Joseon Dynasty hair accessory and hat system

In the late Joseon Dynasty, a double-ringed wooden pseudo-bun was popular with palace concubines, as shown below. This double-ringed pseudo-bun, known as the double-ringed Wangxian bun (双环望仙髻), was a famous hairstyle in the Tang dynasty of China, and was a complex and tall hair bun. Because this kind of bun is so high, combing such a complex bun was particularly time-consuming, taking about six hours. If you don’t have so much time, or you don’t have enough hair, then you should make a bun beforehand, and wear it on top of your coiled hair when you need it, and fix it with hairpins. 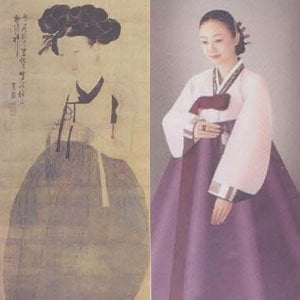 The hats of the royal family and the civil officials of the court during the Joseon period of the Joseon Dynasty all adopted the Chinese Ming Dynasty court hat style, with no difference in shape. It is just that the coronets are worn by the royal family of Joseon Dynasty, the Yisan Guan (翼善冠), the Tongtian Guan (通天冠), the Pibian (皮弁), etc., and the civil officials wore mainly the Liang Guan (梁冠), Wusha Mao (乌纱帽), Futou (幞头), etc. are lower in form compared to the Ming Dynasty.

Until the Qing Dynasty, the Joseon Dynasty in the costume system but did not make changes, still continue the Ming Dynasty crown system.

4. Influence on the Joseon Dynasty clothing color and pattern

The women’s Wonsam, for example, was a formal dress widely worn for important occasions in the palace, such as ceremonial occasions, national festivals, and royal celebrations during the Joseon Dynasty, but by the end of the Joseon Dynasty, it had become popular and was used as a wedding dress for brides on the wedding day of common people. The color regulation of the Wonsam was strongly influenced by the Chinese clothing color system.

In terms of decorative patterns, the Wonsam also became a tool to show the difference between nobility and inferiority. According to the type of pattern, it can be divided into animal patterns, flora patterns, auspicious patterns, and natural patterns. There are not many animal patterns used on the Wonsam, but mainly dragon and phoenix patterns. The dragon symbolizes the supremacy of the royal family and cannot be overstepped by others.

Influenced by ancient Chinese culture, the Korean people also compare the emperor to a dragon and the queen to a phoenix. Therefore, it is widely used in Wonsam. And the flora patterns are most commonly used on Wonsam. The lotus, plum, chrysanthemum, and pomegranate patterns are all connected with Chinese culture.

Even today, there are still many “relics” of the Ming Dynasty in the traditional culture of Korea.

For more on the relationship between Hanfu and Hanbok, you can click here to see the video (from Shiyin 十音).

Kimono, Hanbok (Korean clothes), and Hanfu, in fact, are divided into a variety of styles, the above comparison is only the most confusing comparison of some common women’s styles, only for entry.

The most obvious features of Hanfu are summarized in three:

Hanfu is not only a concentrated expression of Chinese culture but also reveals the spirit and spirit of the Chinese nation.

The Best Hanfu in Summer–Half Arm