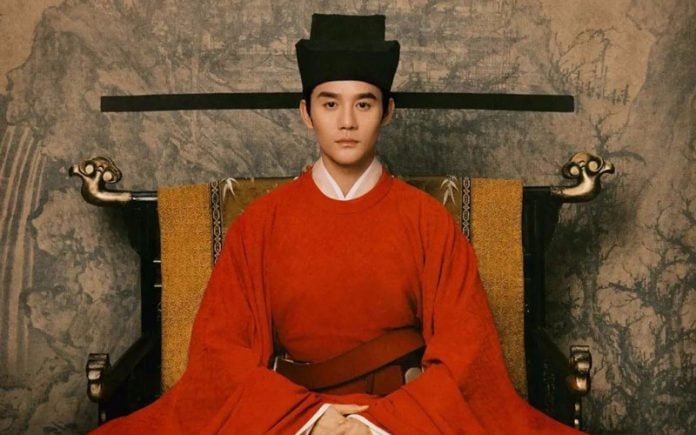 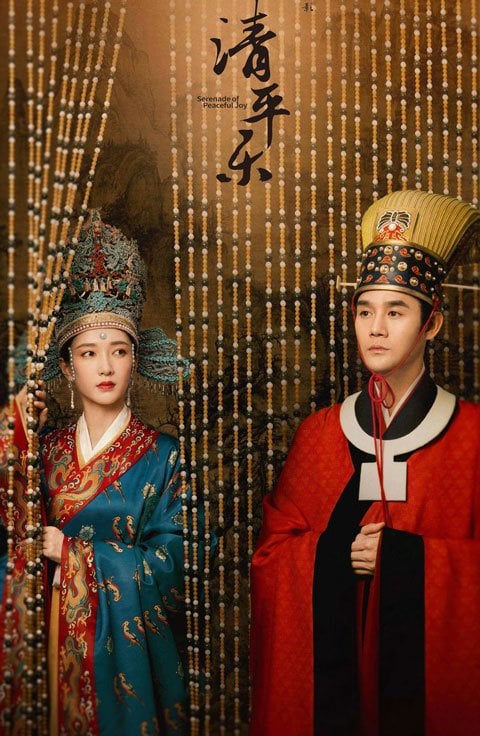 Qing Ping Yue is a complex and realistic restoration of the Song Renzong (宋仁宗) set in the Northern Song Dynasty. In this drama, Wang Kai (王凯), who plays the role of Song Renzong, basically restores from the appearance of the original costumes in the Taipei National Palace Museum collection of Song Renzong Seated Axis, the costumes, makeup, and props in the drama are very exquisite, and will bring you a brief analysis of the costumes on Song Renzong. 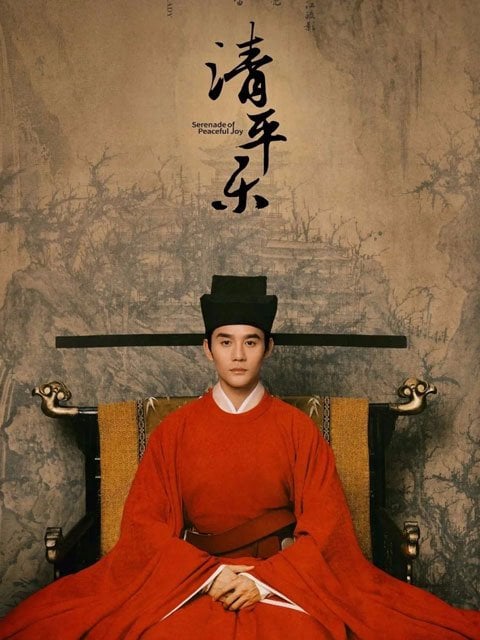 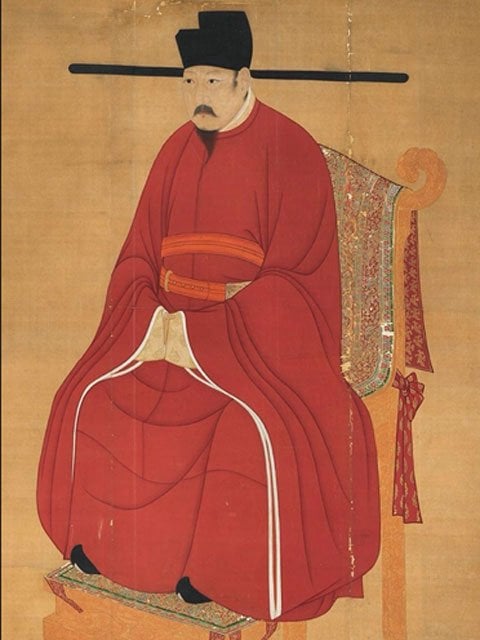 The story of the Futou(幞头) begins in the Tang Dynasty. The popular men’s headwear of the Tang Dynasty was not a complete hat, but consisted of a square piece of fabric called “Futou” and a cane wood or wire mesh cover called “Jinzi”.

The Jinzi was used to cover the topknot of the hair, then the Futou was covered, the two corners were folded up and knotted, and the other two corners were knotted at the back of the head and made to hang down.

Subsequently, it seems that the complicated and cumbersome way of wearing knotted headgear was abandoned, and the Futou became a true “hat” while retaining its appearance. Over the next few hundred years, the shape of the Futou changed according to fashions and aesthetics, with the pendulous horns becoming longer and straighter, and the change from a round to a square top, with many exaggerated designs that departed from practicality, as we can see in the ancient paintings. During the Five Dynasties period, Futou forms with straight horns were very common.

This shows that during the Song Dynasty, the form of Futou became a popular form of headdress for many occasions and for all social classes. In the stills and short film released by the crew, various forms of Futou are shown in the drama. In the poster, Wang Kai is wearing a form of Zhanjiao Futou (展脚幞头).

The Song emperor’s clothing system was divided into three types according to the occasion and the form: shirt-robe (衫袍), the Gui-robe (䙆袍), and the narrow-robe (窄袍). This large-sleeved robe in the Song Renzong Seated Axis belongs to the most formal of the emperor’s regular clothes in terms of form, also known as Gongfu (公服). Gongfu are ochre yellow or pale yellow, mostly used in the big banquet.

The shirt-robe in the Song Dynasty also inherited the system of the previous dynasty, and the round neck and big sleeve shirt-robe were developed from the round-necked Lanpao (襕袍) costume imported from the North and South Dynasties, the main feature is a round neck, narrow sleeves, and the hem is connected with the Henglan (横襕), and without slit. 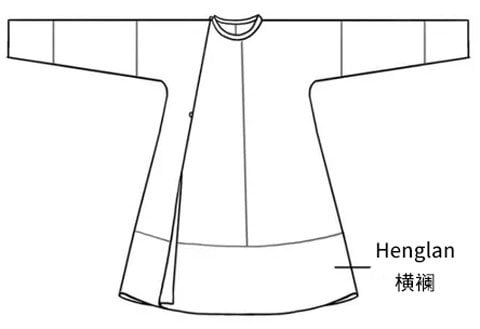 Due to the no slit character of the Lanpao, and the relatively solemn appearance it presented, it became increasingly formal and grand from the height of the Tang Dynasty until the late Tang Dynasty. In addition to retaining the basic features, Lanpao was mainly characterized by a longer body and wider sleeves. Since then, the round neck robe has become one of the most iconic parts of the dress and official uniform system too.

In addition to the red robe added during the Song dynasty, Wang Kai’s pale yellow robe in the stills is a direct representation of the Song dynasty’s inheritance of the robe system from the previous dynasty. 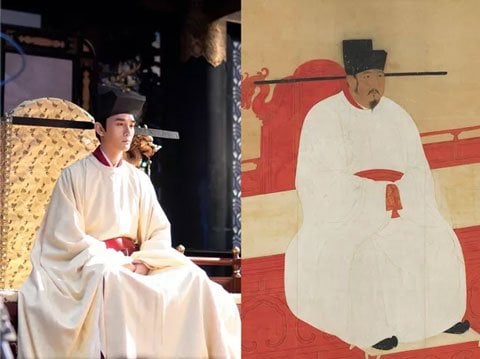 The round neck and big sleeve shirt unearthed from the tomb of Zhao Boyun(赵伯沄) in Huangyan, Zhejiang province, is strong evidence of the Song dynasty’s system of official attire. More than seventy pieces of clothes, trousers, socks, shoes, boots, and accessories unearthed from his tomb truly and completely reflect the ceremonial costumes and daily wear of the members of the royal clan in the Song Dynasty. 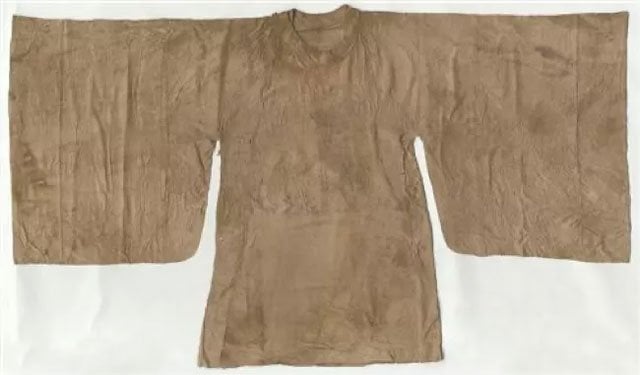 The Gedai (革带, belt) worn by Song Renzong in the portrait is a two-belt Ting Gedai (双带鞓革带), which appears to have two from the front, but is in fact apparently just one belt, but it does consist of two parts. This wide and long Gedai is still developed from the belt of the former dynasty, which can be traced back to the “Diexie belt (蹀躞带)” introduced from the north during the two Jin dynasties, and its style was combined with the tradition belt during the Sui and Tang dynasties, and began to be institutionalized and incorporated into the Chinese costume system. 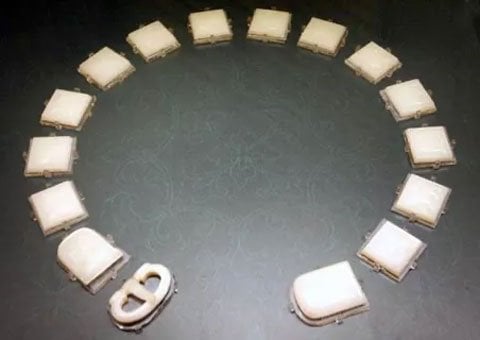 The Song dynasty had a system of wearing belts for many times, and different ranks were distinguished by the texture, decoration, and color of the belts. The main body of the leather belt was a long and a short red belt, both perforated, the long belt was decorated with nine to fourteen square gold or jade, known as the “Kua (銙)”, which were decorated with motifs, or peach-shaped, the long belt was studded with a buckle and Chawei (䤩尾, used to protect the ends of the belt and to beautify the overall appearance), while the short belt was only studded with a buckle.

Due to the long design, one end of the belt had to be wound in front of the body, thus creating the visual effect of two pieces. This way of dressing became an iconic phenomenon in the Song Dynasty and had some influence on the development of the belt in later generations. From the stills, the Gedai worn by Wang Kai visually recreates the portrait. 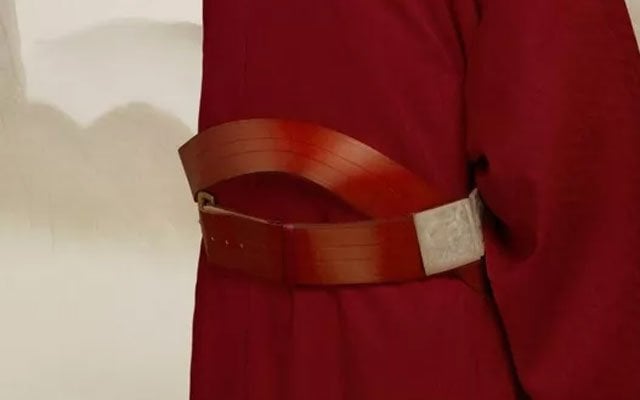 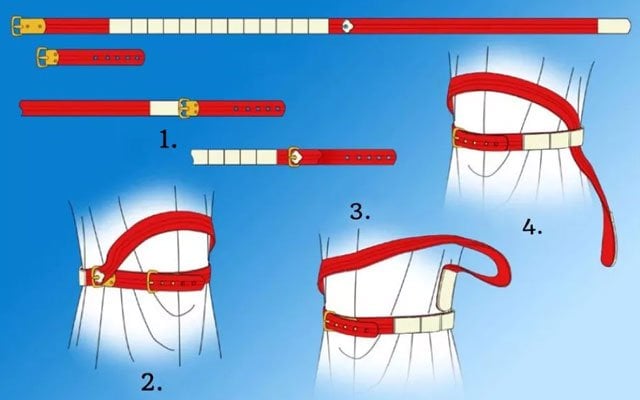 The above is about Song dynasty emperor’s clothing, more about emperors’ Hanfu history can click here. 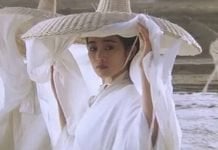 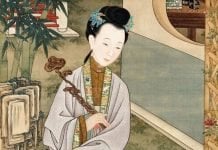 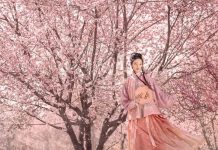 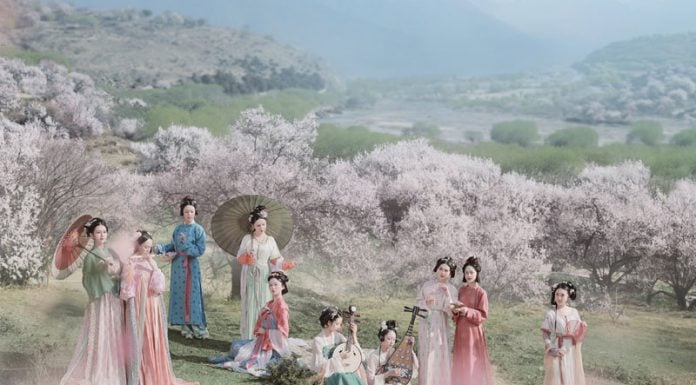