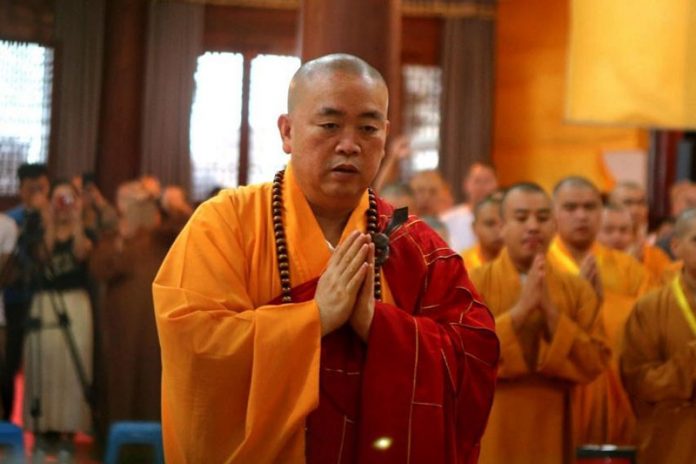 Mount Song, along the southern bank of the Yellow River, that is known as the central mountain of the Five Great Mountains of China. Incense drifting through ancient cedars, saffron-robed monks, limbs a blur of movement, making quick work of imagined enemies. The boing of a giant bronze bell calling the faithful to prayer.

This is the scene at the fabled Shaolin Temple, a cradle of Kungfu and Zen Buddhism nestled in the forests of Henan province, where legend has it monks have trained in martial arts for centuries. 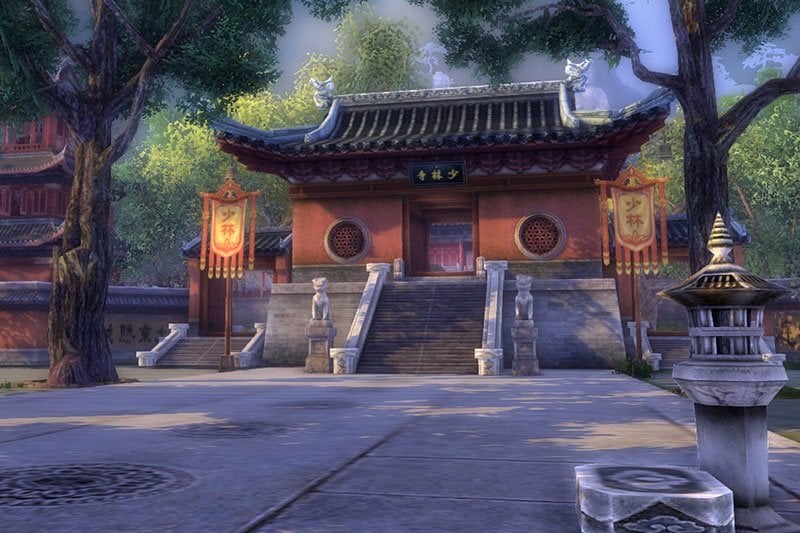 Nowadays, the Shaolin has become a successful brand, and one of the most famous scenic spots in China, attracting more than 10 million tourists a year, according to the China Business Journal.

Why is Shaolin so popular? Let’s through an interview with the chair of Shaolin Temple, unveil its rapid development in the past 30 years.

Shi Yongxin, originally named Liu Yingcheng, was born into a family in Anhui Province in 1965.

In 1981, he made his way to Shaolin Temple at age 17. There he converted to the Three Jewels and received the Dharma name Yongxin under the discipleship of Former Abbot Xingzheng.

The Road to be an Abbot

He was an exceptionally bright youth, after a short & intense period of study, Yongxin went on a pilgrimage to study at other Buddhist monasteries.

The experience at other temples opened his eyes as to what Shaolin could be. He completed three years’ studies and cultivations, then returned to the monastery in 1984 and assisted the abbot and the elders with daily operations at Shaolin Temple. 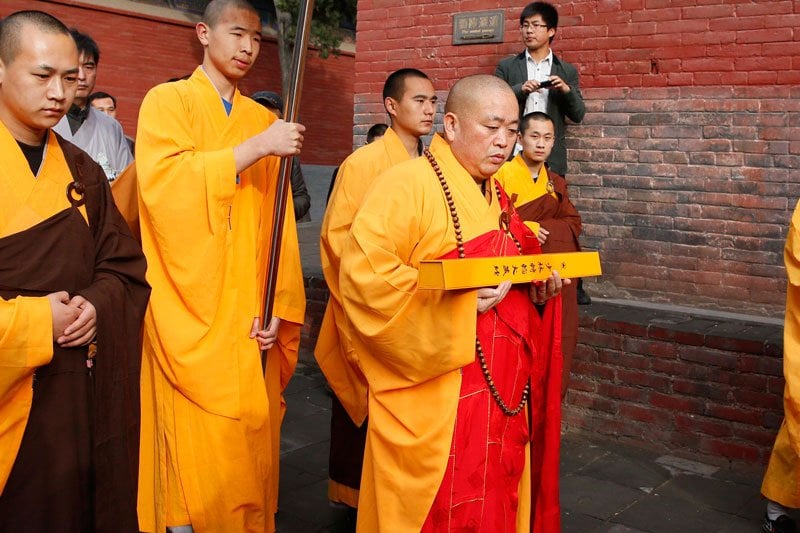 The former Abbot Xingzheng passed away in 1987, took the ceremonial alms-bowl and robes on Yongxin’s shoulder (a symbol for the Dharma transmission). Master Yongxin entered the Shaolin Temple Management Committee and started to run a branch monastery.

After running the monastery for nearly ten years of experience, in August 1999, he was inaugurated as Shaolin Abbot in the Inaugural Ceremony. And February 2010, Yongxin was elected as Director of Overseas Communication Committee of Buddhist Association of China.

Shaolin represents the best of traditional Chinese art in Kungfu and Chan Buddhism. Although Shaolin monks are renowned for their Kungfu, there is also a scholarly side of the practice that is often overlooked by the martial community.

By 1993 Yongxin was spearheading a multitude of projects to promote Shaolin culture, he established the Chinese Zen Poetry Research Center, which published an annual collection of Chinese Zen poems. He also created the Shaolin Calligraphy and Art Research Organization. 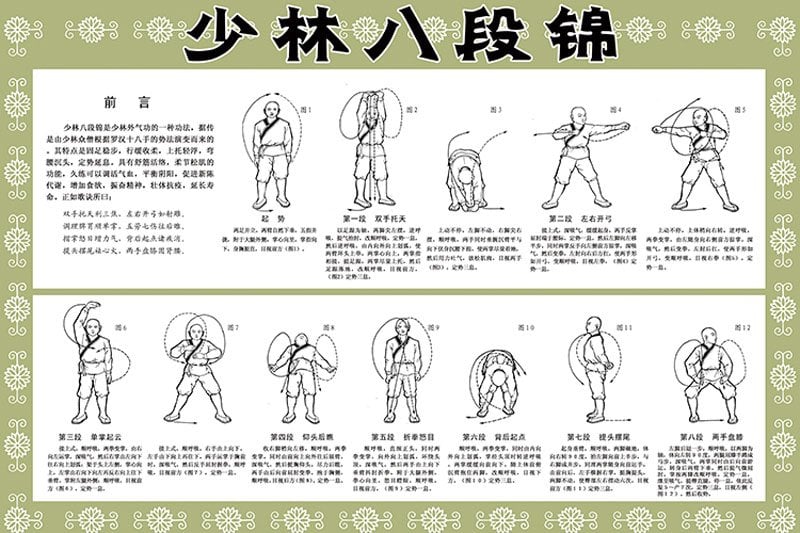 He only allows himself five hours a day of sleep, and no matter how busy his schedule may be, he always squeezes in time to study and write. He was the chief editor for Shaolin Temple, has several publications to his credit, Shaolin Zen Forest Mind Concentration Poems, and the International Zen Culture Symposium Articles Collection. He also organized the extensive tome Shaolin Martial Arts and Medicine Secrets, which was accepted into the collection of the national library.

Many Challenges to Reform

Venerable Abbot Yongxin is of the new generation of Chinese religious leaders, the post-Cultural Revolution generation, and he is now at the wheel of one of China’s most high-profile and influential temples. Steering Shaolin Temple in the right direction is a difficult task. 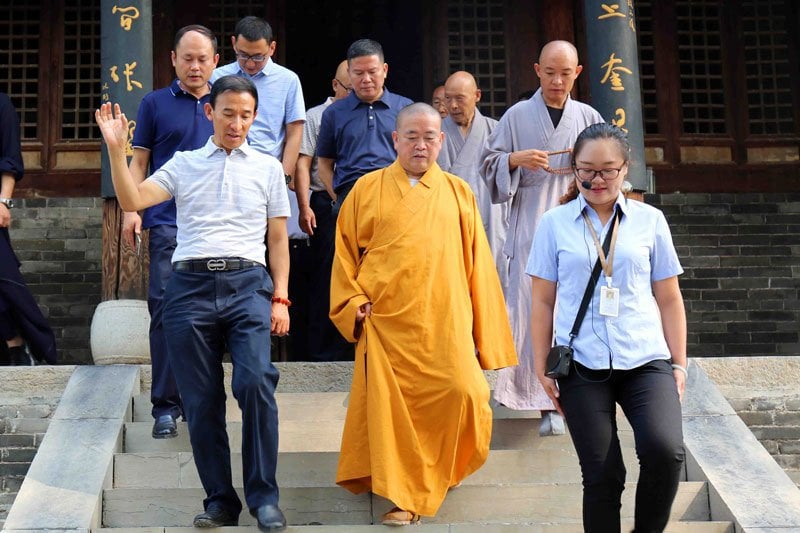 Many organizations have vested interests in Shaolin, while Yongxin’s reform projects, like his ambitious bid for UNESCO World Heritage status, are overlooked. Any few critics know Shaolin and understand its connotation.

Many times, he had been accused of turning China’s oldest Buddhist temple (founded in 495 AD), and cradle of Kungfu, into a tourist attraction and a place of entertainment. Shaolin also gets revenue as a location for movies and from kungfu classes and performances around the world. But under China’s law, religious organizations can engage in economic activities for themselves and their community. 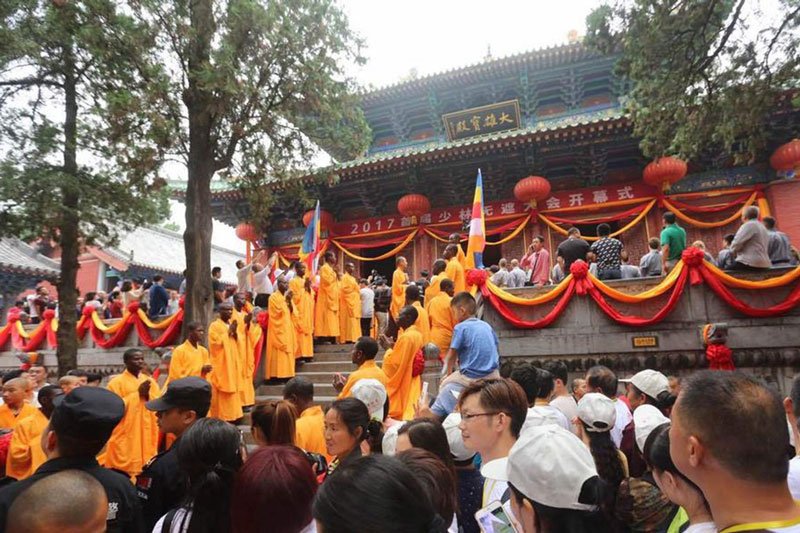 Still, the Shaolin’s economic rise to prominence has raised many questions among the faithful who think that Buddhism means poverty, asceticism, silence, and separation from the world.

When returned to Shaolin Temple, Yongxin worked to develop the Shaolin Kungfu, which to provide social services to the people.

In 1986 he helped establish the Shaolin Temple Martial Way Development Association. Their mission was to form a group of researchers working on recovering, organizing, and practicing Shaolin Kungfu. The following year he developed a warrior monk demonstration team for Shaolin Temple and became the team leader.

In February of 1988, Yongxin founded the Shaolin Red Cross Association to provide medical assistance to the local suburban residents. In June of 1989, Yongxin led the Shaolin Warrior Monk Team on a fundraising demonstration tour across China. They collected money for a Hope Primary School that was erected by the Yellow River in Henan. 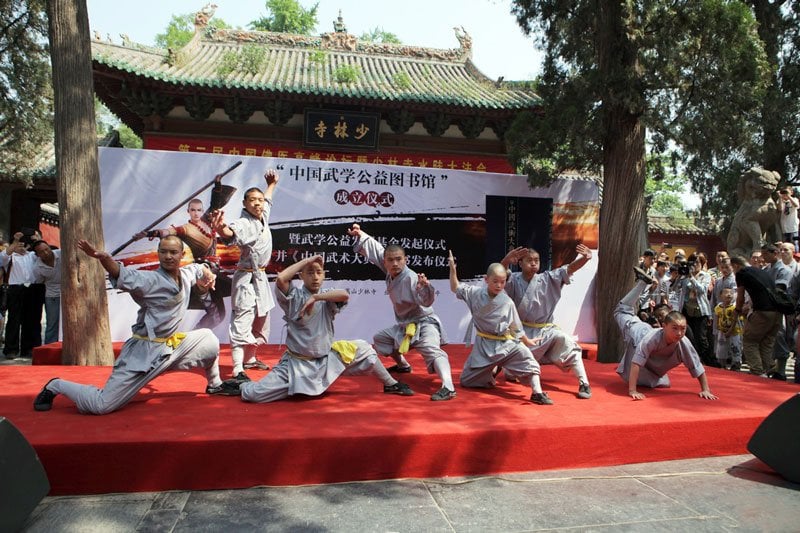 In 1994, Yongxin established the Shaolin Charitable Benevolent Non-profit Foundation, over which he presided. Since the foundation was established, it has provided relief for natural disaster victims and the poor. They have sponsored projects like providing medicine, education and new wells for impoverished villages and offering new crops for drought victims. The foundation has also organized volunteer medical aid clinics and gathered donations for flood victims.

Their achievements have received several high honors from the government and tremendous support from the people.

From China to the World

Shaolin celebrated its 1500th anniversary in 1995, although this historic event truly helped to promote Shaolin, that’s not enough. Yongxin reaffirmed his devotion by embarking on one of the holiest of Buddhist pilgrimages.

First, he visited the four most sacred Buddhist sites: 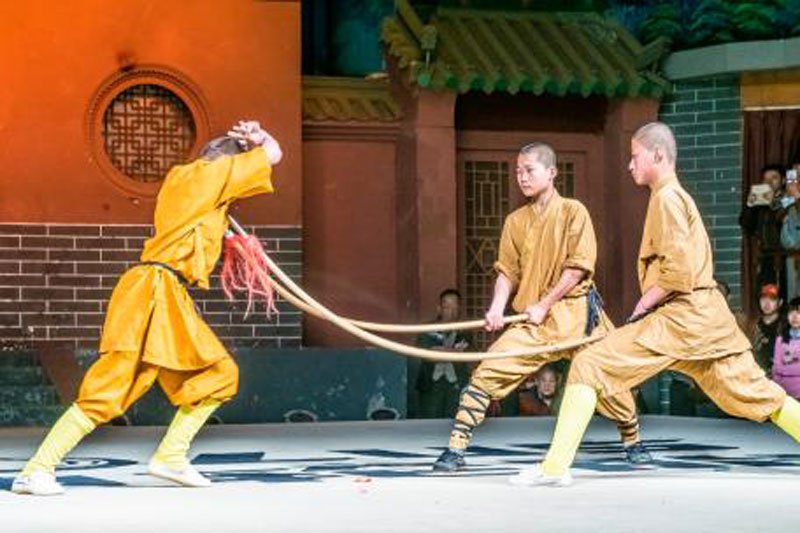 In October of 1999, Yongxin was invited to the United Kingdom by the British Royal Family and had a communication meeting with the Queen. The next year in February, he went back to Europe, invited by the Austrian Tourist Bureau as part of a millennial Chinese cultural celebration. There he met with the vice-president of the International Olympics Committee to discuss the possibility of Wushu becoming an Olympic event. 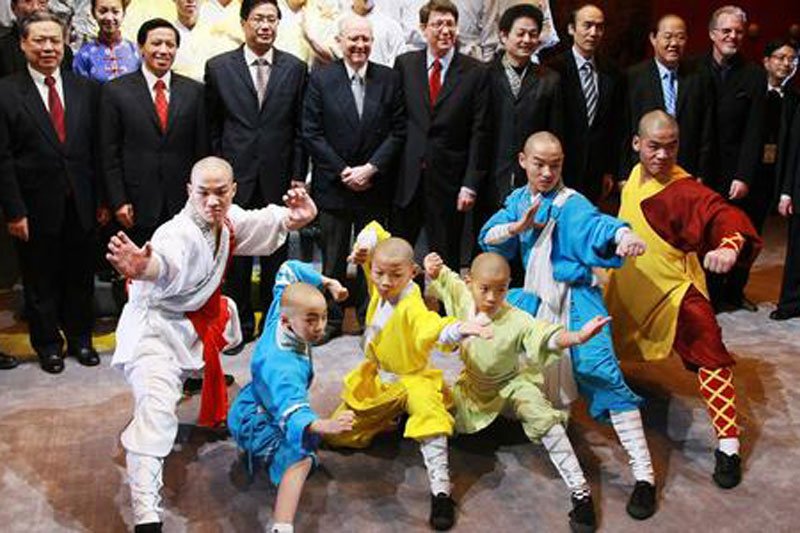 Besides, he began working on another innovative project for Shaolin Temple – the Official Shaolin Temple Website. The site is a great resource, help people around the world can learn about Shaolin online.

From the 21st century, Yongxin’s primary campaign is to establish Shaolin as a UNESCO World Heritage Site. UNESCO stands for United Nations Educational, Scientific and Cultural Organization. It’s an extremely prestigious honor and would bring Shaolin under the auspices of an international protective and preservation organization. China, being one of the world’s oldest cultures, already has 52 sites. 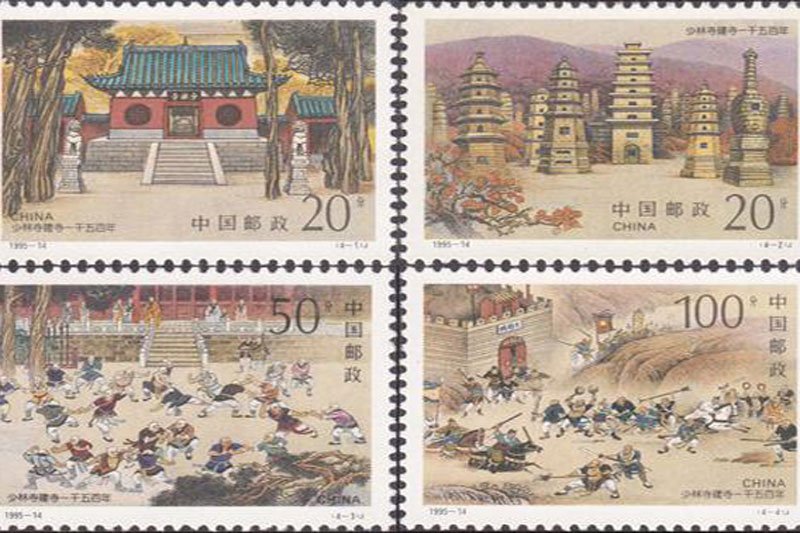 After 10 years of unremitting efforts, In August 2010, Dengfeng Shaolin Temple was deliberated and approved by UNESCO at the 34th World Heritage conference and became a world cultural heritage.

A Lifelong Learner of Shaolin

At the 7th session of the Buddhist Association of China, Venerable Abbot Shi Yongxin’s efforts were recognized with one of the highest honors for a Chinese Buddhist.

To bring Shaolin Culture & Kungfu to the worldwide Shaolin enthusiasts, he has promoted various activities and engaged in domestic and foreign cultural exchanges. Abbot Yongxin has been contributing to the development of Shaolin Temple and the spread of Shaolin culture.

By now, Yongxin was unquestionably the most influential monk of the Shaolin order.

“A lot of people misunderstand the role of Kungfu in their daily life. When they think of practice, they think they must have ancient Chinese clothing, go to a club with lots of equipment or a park to practice.” Yongxin said, “For us, Shaolin exists in every move of every moment of your life every day. It exists in dressing, eating, sleeping and walking.”

He adds, Buddhism is without finishing point, and the most important is to foster your belief, your confidence. 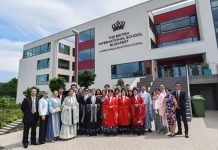 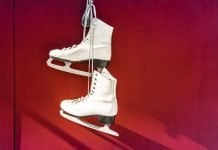 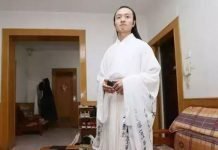 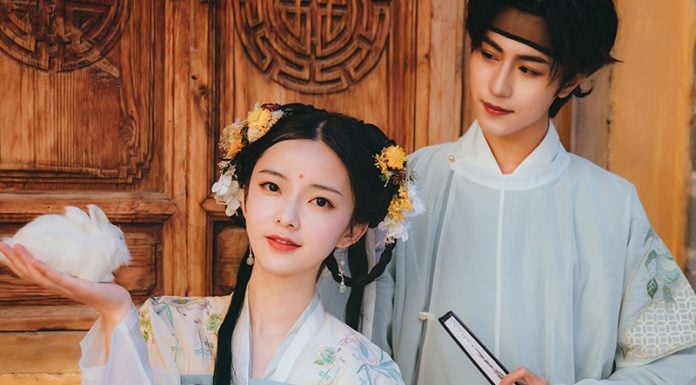