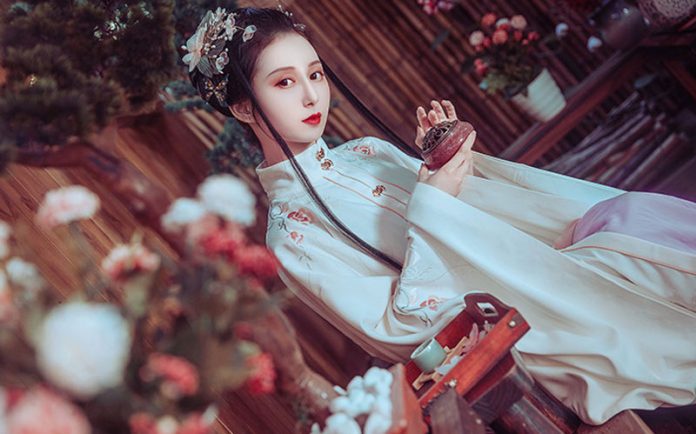 As winter approaches, more and more Hanfu enthusiasts are focusing their attention on the Ming style Hanfu. Whereas in the Ming style Hanfu costume, the combination of an Ao (袄, jacket) on top and a Qun (裙, skirt) on the bottom is especially popular. Ao has several types of collars, and today we are focusing on the standing collar today, briefly introduce the history and how to wear it.

History of the standing collar

Some of you might recognize the standing collar as the mandarin collar, most people think the standing collar is derived from Qing Dynasty Manchurian dress, also known as the cheongsam or qipao, but it is actually originally invented and passed down from the Ming Dynasty, the dynasty before the Qing Dynasty, it is a part of the hanfu system and was later on adapted into Manchurian dresses, and today it’s widely known in the world as the mandarin collar, and recognized as one of the most distinctive features of Chinese clothing. 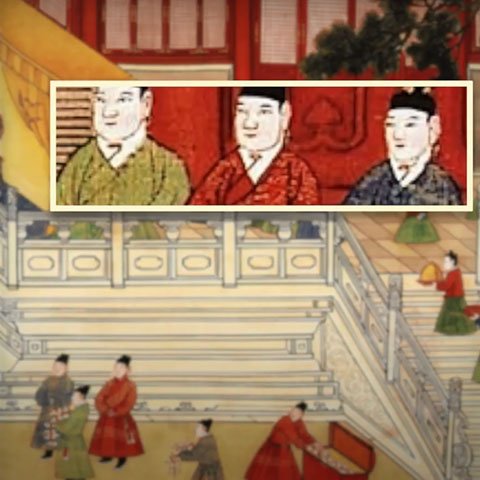 Do you remember this Ming Dynasty painting? Almost every woman and child are wearing the cross collared Aoqun, showing how popular this style was at that time. However, when we look more closely at the painting, you can find a little button right in the center of their crossed collars. 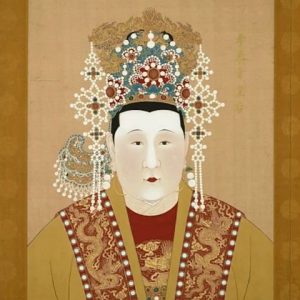 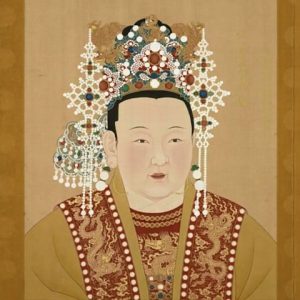 Empress Sun(孙皇后) also wears a cross collar, when it gets to Empress Qian(钱皇后), a vertical line appears in the middle of her collar, but without any buttons. 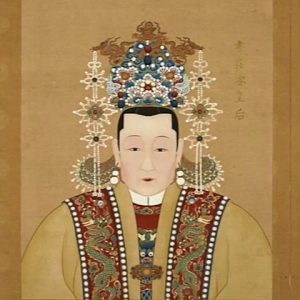 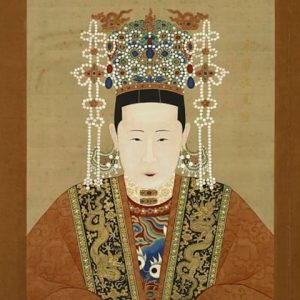 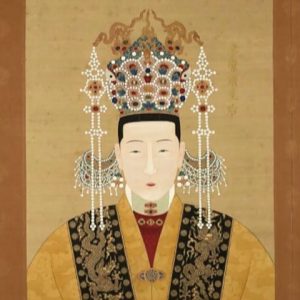 Empress Chen(陈皇后) is the same, when it comes to the last empress, Empress Wang(王皇后), her clothing style has changed quite a bit from the previous ones, but she still wears a standing collar. 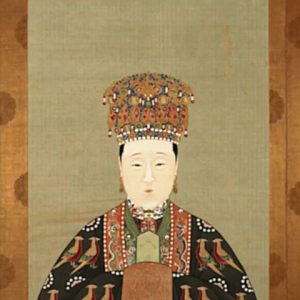 Although the empress’s wardrobe cannot define the clothing style of the whole nation, it’s representative of the trend, From Empress Qian to Empress Wang, there exists a transitional period, In this painting during the Chenghua period, ladies already put buttons on their cross collars, and it eventually evolved into a standing collar with two buttons. By the late Ming Dynasty, the standing collar had become stable for women’s wardrobe.

The fusion of standing collar and Qing Dynasty clothing

It was naturally passed down into the Qing Dynasty, During the early Qing Dynasty era, Han women continued to wear the Ming Dynasty clothing style, while Manchurian women wore Manchurian dresses. The two clothing styles coexisted together for several hundred years, but eventually, the Manchurian dresses went from having no collars to adding false collars, to finally incorporating the Ming style standing collar. By the time of the late Qing Dynasty, standing collars had evolved into the modern mandarin collars which are commonly seen in Chinese dramas, they are a symbolic element of Chinese clothing today. 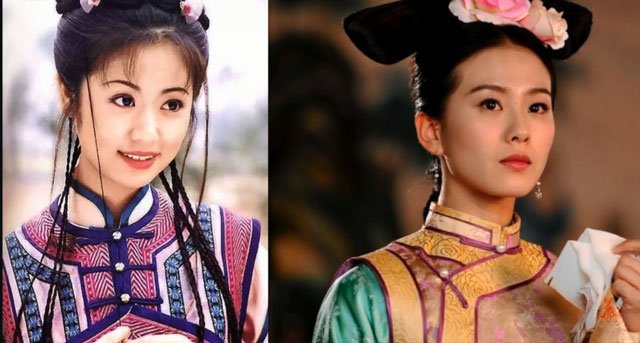 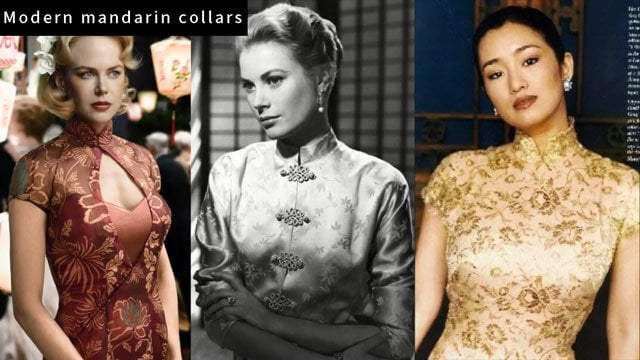 How to wear the Ming style standing collar jacket

Ming Dynasty ladies usually wear a Ma Mian skirt or pleated skirt. This one is a pleated skirt with pleats all the way to the bottom. There are usually two types of one-piece skirts, one style you insert the belt through a hole in the middle, the other style uses an extra set of ties.

This is the first type, so after wrapping it halfway around the body, insert the belt into the hole, and wrap the remaining skirt to the back, cross the belts from behind and then tie them up in the front.

This is the standing collar Ao or jacket, This style is found in many archaeological relics, Ao is defined as a top with lining, it has narrow sleeves.

There is a middle seam on the back that represents a person’s righteousness. 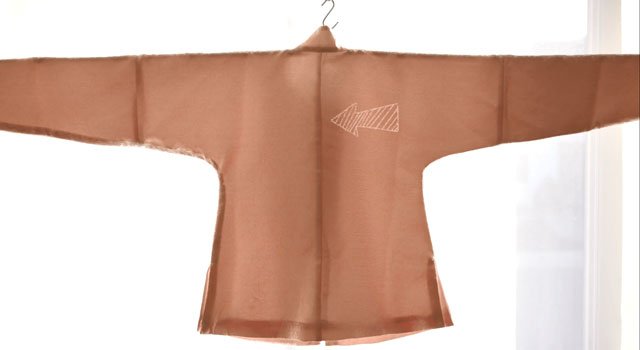 There are four sets of metal buttons on the body of the Ao, and an additional two sets on the collars, and It’s made of pale pink jacquard fabric, that is shiny under the sunlight.

Keep in mind that the Ming Dynasty people usually wore round-collar inner garments underneath, you can wearing a modern shirt instead. After putting on the jacket, align the buttons together, usually work on the buttons on the body first, and button the collars last, because they are harder to do.

Some friends may consider that standing collars are not the most flattering on people with short necks, on the contrary, a well-tailored standing collar will make the neck appear longer. Last but not least, added a long necklace. 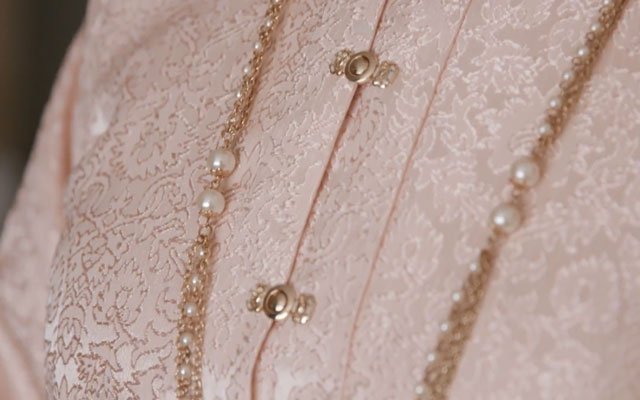 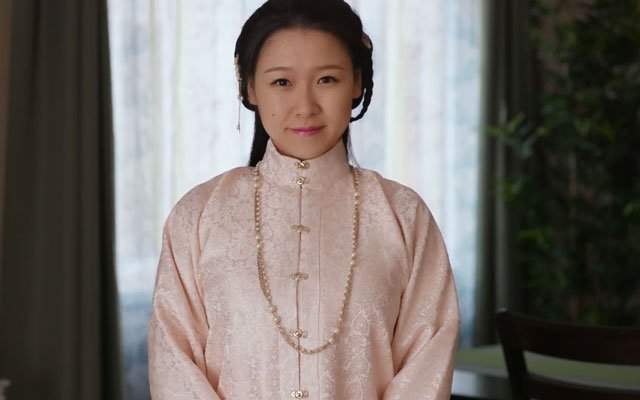 You can click on the video to see the details of how to wear Hanfu – Ming-style standing collar jacket:

More about Chinese traditional dress and how to wear Hanfu can be found here. 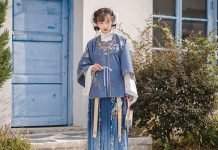 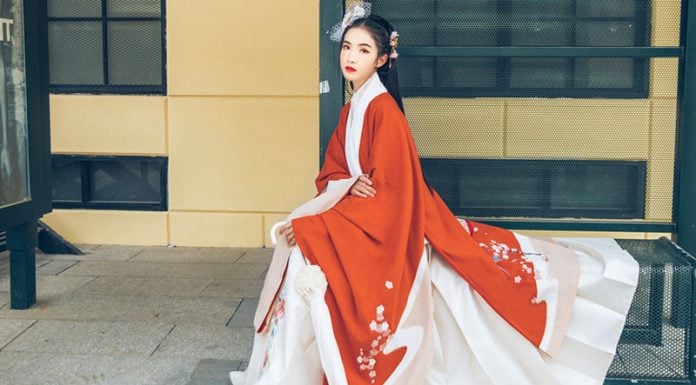 5 Tips to Make a Trip to China Easier