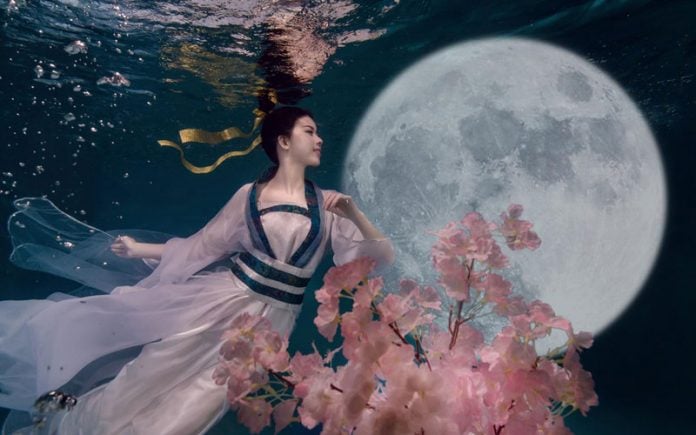 The Mid-Autumn Festival has a long history. Since ancient times, China has had a ritual system for worshipping the moon. It also coincides with the harvest of autumn grain, and the ancients held a series of rituals to thank the gods for their blessings. The moon is bright and clear at mid-autumn, and the autumn air is crisp and cool, making it the perfect time to enjoy the moon.

Later, with the development of the times, moon worship was gradually replaced by moon appreciation, but although the ritual colors have faded, the festival continues to this day and has been given a new meaning. As a popular traditional cultural festival among many ethnic groups in China, many places have formed the Mid-Autumn Festival customs with local characteristics.

As for mooncakes, their beginnings date back to the Han Dynasty. Zhang Qian’s mission to the West brought back walnuts and sesame seeds, and the local people used walnuts as filling to make a thin-skinned, round snack called Hu cakes. It is said that when Emperor Xuanzong of the Tang Dynasty (唐玄宗) was celebrating the Mid-Autumn Festival, he thinks the name “Hu cakes” for its unpleasant sound, and Yang Guifei, looking at the big, round moon, casually uttered the word “mooncake”. From then on, the name was changed to mooncake. 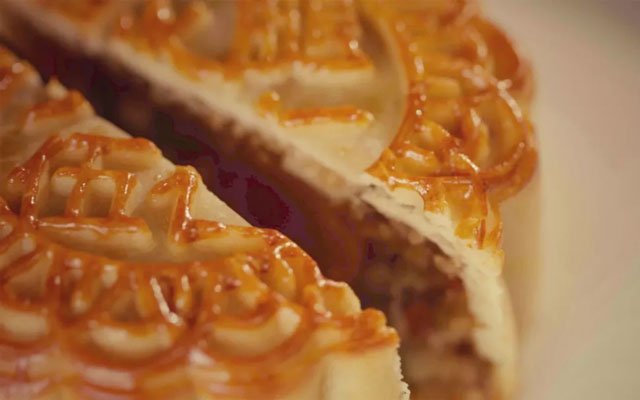 What were the ancient customs of worshipping the moon? 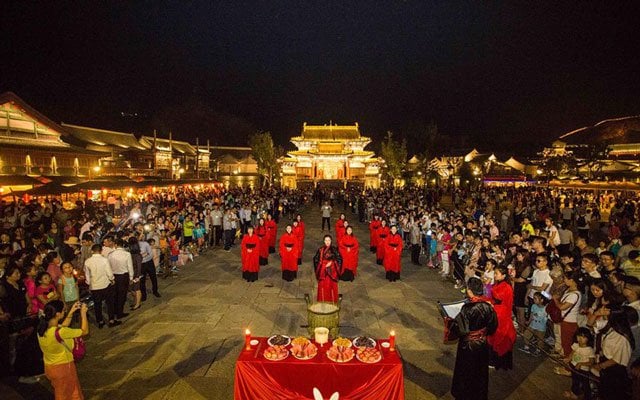 Since it is a ritual activity, so do you know what you need to prepare for this Mid-Autumn Festival moon worship?

When it comes to moon worship tributes, then we can definitely think of one thing that is integral to all kinds of rituals. That’s right, it’s fruit. In autumn, it is the season of harvest, so how exactly should we choose when worshipping the moon? 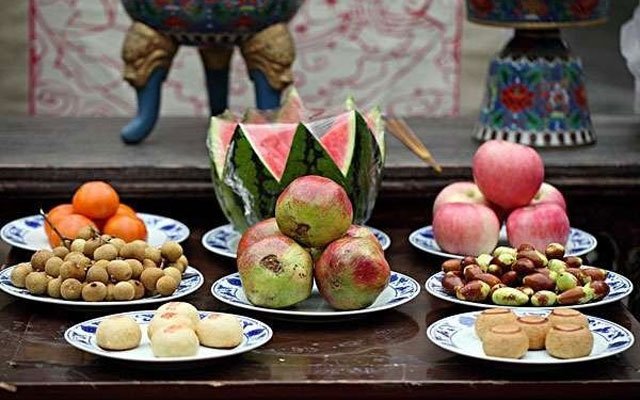 The fruits used in the mid-autumn moon worship are basically fresh fruits of the season, like apples, watermelons, peaches, pomegranates, grapes, longan, and persimmons. At this point, you may notice that, like the shape of the mooncake, these fruits are basically round and almost always have good meanings, such as apples for peace and safety, peaches for longevity, and persimmons for good fortune.

Also, besides fruit, two other things are often used as to the moon worship- bean and cockscomb. Do you know what this is used for?

The cockscomb flower symbolizes the shadows of the trees on the moon and is used for the jade rabbit to enjoy the scenery, while the legend says that the jade rabbit loves to eat bean, which is a small snack offered to the rabbit to please him.

In addition to worshipping the moon, appreciate the moon is also an indispensable activity of the Mid-Autumn Festival. At every festival, the whole family sits around and enjoys the beautiful appreciation of the moon and the happiness of the family reunion.

In fact, the custom of appreciating the moon during the Mid-Autumn Festival was already very popular in the Tang Dynasty, which was characterized by social stability, political enlightenment, economic prosperity, unprecedented openness of thought, and popular moon appreciation activities. One of the important performance is that many poets have poems about the moon in their famous poems. Such as Zhang Jiuling (张九龄): “As the bright moon shines over the sea, from far away you share this moment with me.” Li Bai’s (李白): “To invite the moon I raise my cup. We’re three, as my shadow shows up.”

However, the Mid-Autumn Festival of the Tang Dynasty was dominated by literati and aristocratic families, and the general public began to participate in it in the middle and late Tang Dynasty, but it was not popular.

In Song Ci, there are also many chanting the mid-autumn moon, such as Su Shi’s (苏轼): “The moon does wax, the moon does wane, and so men meet and say goodbye. I only pray for our life be long, and our souls together heavenward fly!” It is an imaginative and thought-provoking work that revolves around the mid-autumn moon and uses the roundness of the moon as a metaphor for the separation of people. 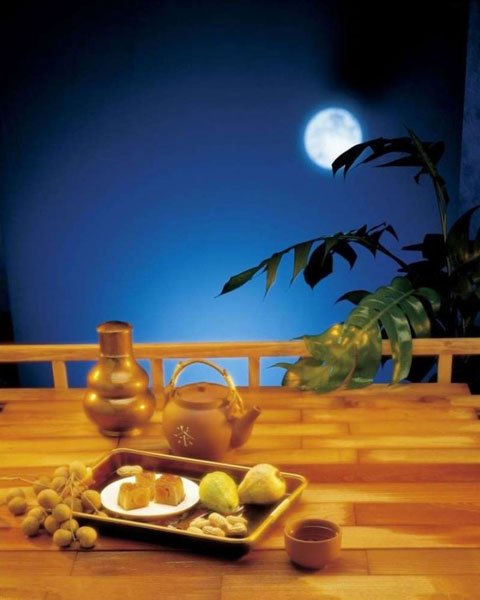 In the Ming and Qing dynasties, moon appreciation activities were popular among the people, and the Mid-Autumn Festival became the second most important traditional festival after the Spring Festival, and many places have developed unique local customs.

Although these customs, which have been handed down for thousands of years, are far from being as prevalent as they were in the past. However, many places still hold grand celebrations at the Mid-Autumn Festival to send love to each other and pray for a good harvest, which has become a colorful and precious cultural heritage.

Jue Mountain (珏山), located in Jin City (晋城), has been an excellent place for the moon festival since ancient times. The natural scenery of Jue Mountain makes the Mid-Autumn Festival culture show its distinctive and unique charm and has a rich cultural background. 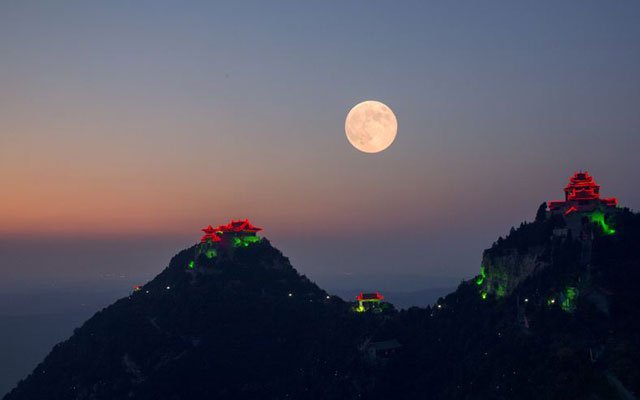 According to local custom, on the night of the Mid-Autumn Festival, when the bright moon rises, a large moon festival is held, and in 2011, the custom of the Mid-Autumn Festival in Zezhou was listed in the national intangible cultural heritage protection project. Jue Mountain’s unique moon worship activities have received much attention from various parties, and there is a constant stream of people visiting Jue Mountain to worship the moon during the mid-autumn festival. 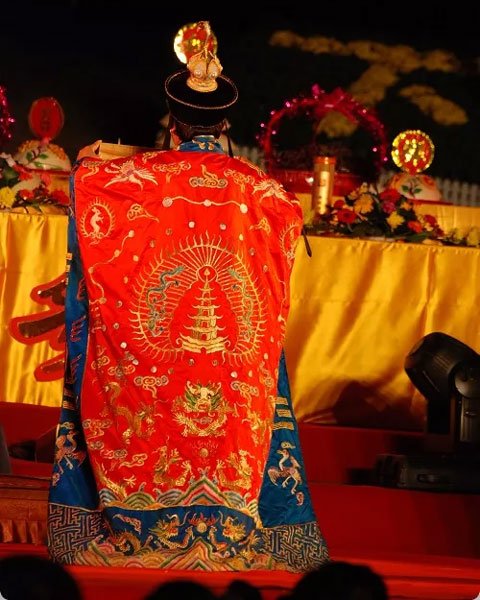 The fire dragon dance, which originated in the 19th century to eradicate the epidemics, is now the most traditional custom of the Mid-Autumn Festival in Hong Kong. It was listed as a national intangible cultural heritage in 2011. 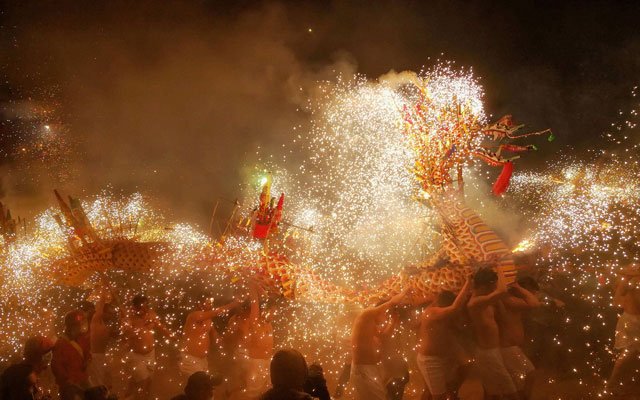 From the night of the 14th day of the 8th lunar month every year, a grand fire dragon dance is held in the Causeway Bay area for three consecutive nights. The fire dragon is more than 70 meters long, with a 32-section body made of pearl grass and decorated with longevity incense. On the night of the festival, the streets and lanes of the district are lively and bustling with the dancing and twisting of the fire dragons under the lights and music of the dragon drums.

According to legend, the founder of the game is Zheng Chenggong. Back then, Zheng Chenggong ordered his subordinates to invent this game in order to inspire his soldiers who were homesick. After centuries of changes, it has become a unique Mid-Autumn Festival culture. 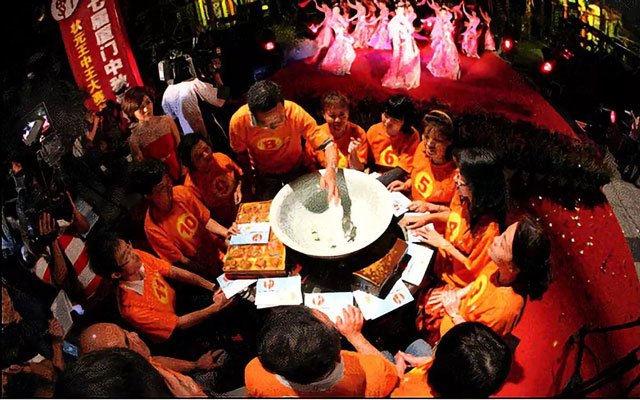 Take six popular folk dice, put them in a large porcelain bowl, and throw them, let the participants play the game. It is believed that this game can predict one’s luck in the coming year. In particular, the person who won the big prize, a year of luck will always be particularly good. In 2008, the Mooncake festival dice game was selected as the second batch of national intangible cultural heritage. 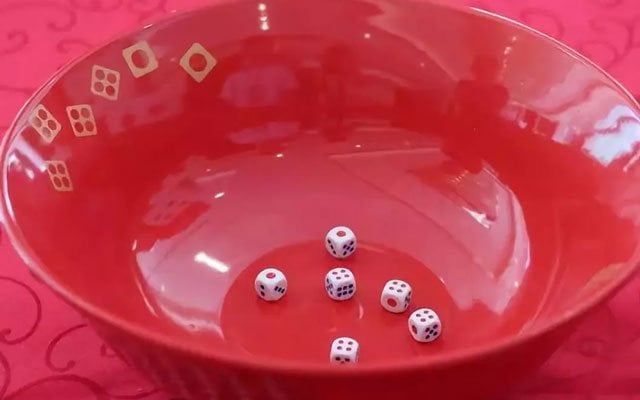 Haining, Zhejiang: watching the tide of the Qiantang River

In ancient times, in Zhejiang province, apart from enjoying the moon at the mid-autumn festival, tide watches can be regarded as another great mid-autumn event. The Haining Tide (海宁潮) is especially famous for its unique and magnificent appearance. Haining Tide Park, located in the strong tide section of the Qiantang River, is the best place to watch the tide. 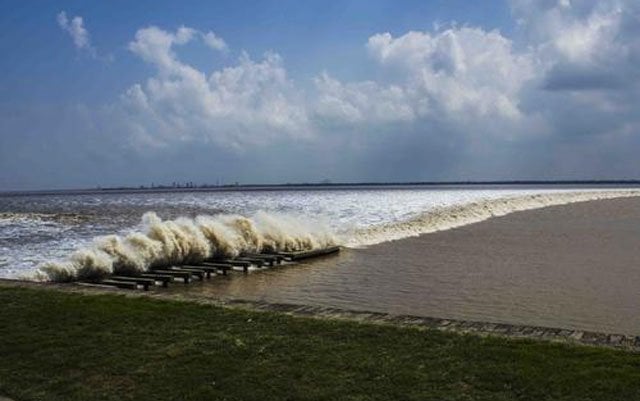 Eat osmanthus, drinking osmanthus wine: every year in the eighth month of the lunar calendar is osmanthus in full bloom, so the lunar August is also known as “osmanthus month”. On the night of the Mid-Autumn Festival, people look up at the moon, smell the fragrance of the osmanthus, drink a cup of osmanthus honey wine, and then eat small round taro poured with sugar osmanthus, and enjoy the family sweet. 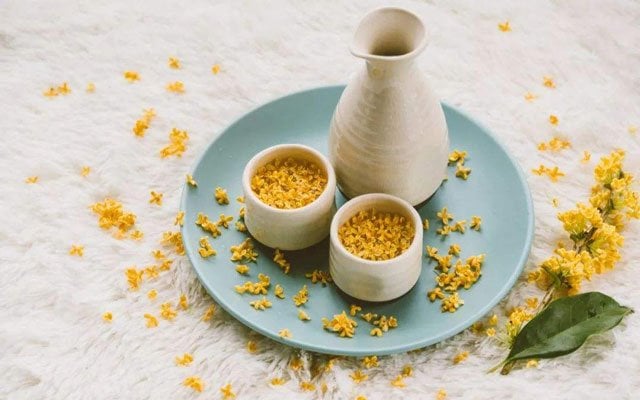 A beautiful mid-autumn festival naturally involves classical Hanfu. We’ve also found some Hanfu that are perfect for the Mid-Autumn Festival. 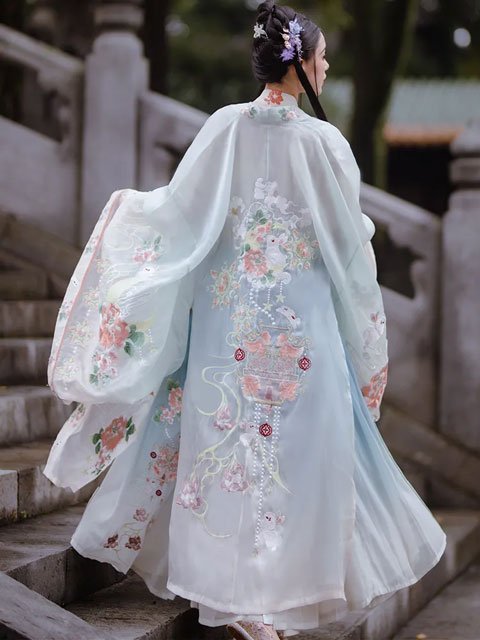 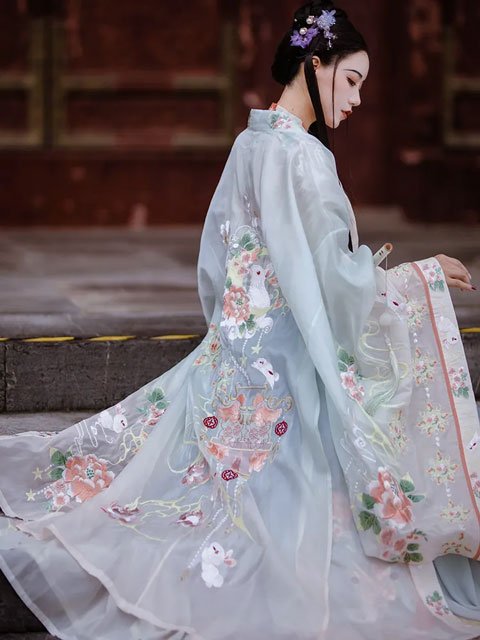 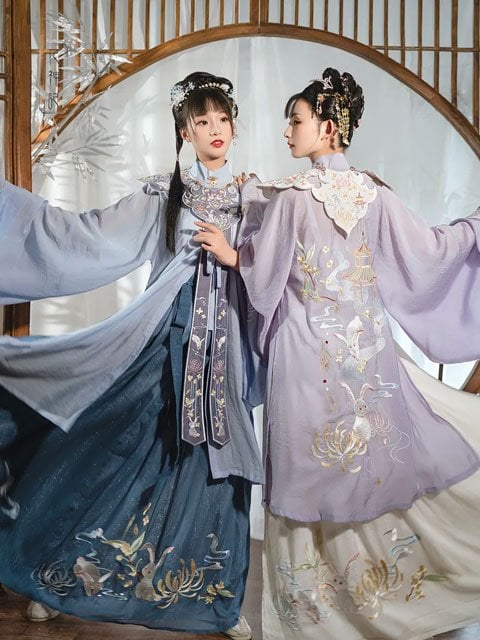 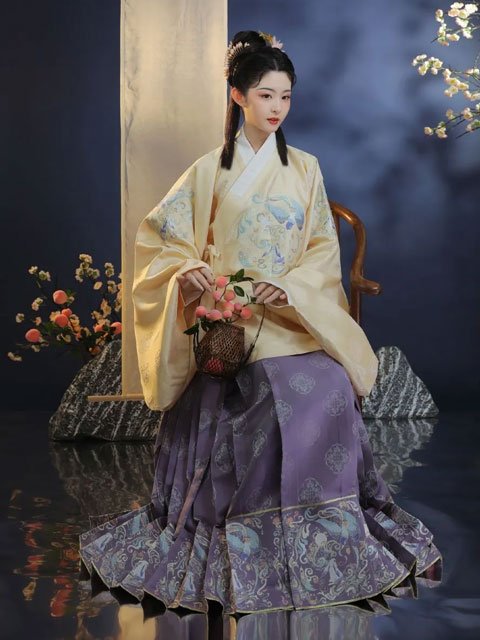 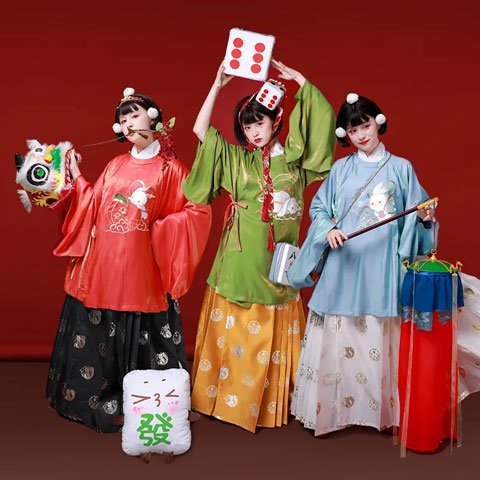 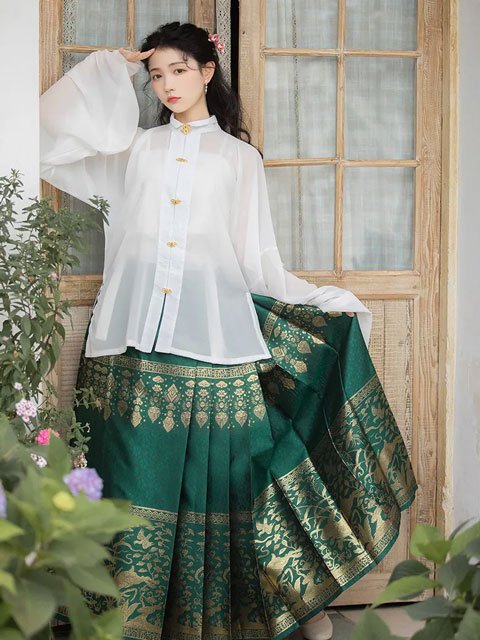 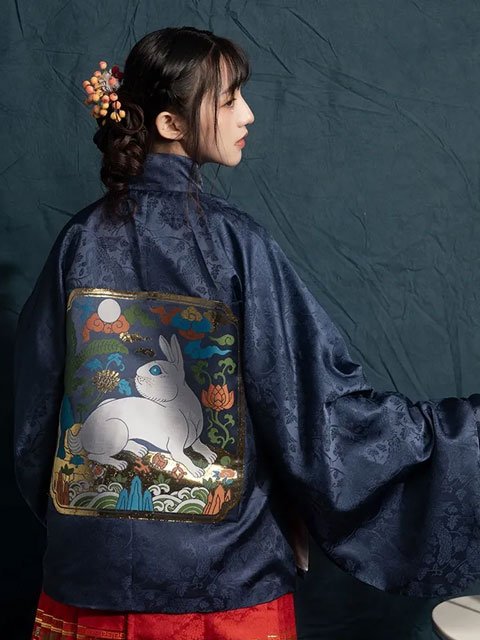 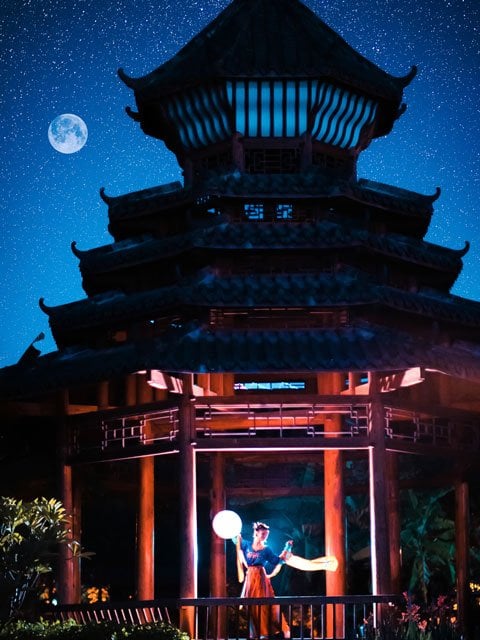 Happy Mid-Autumn Festival to all the Hanfu lovers! 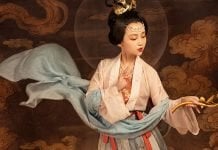 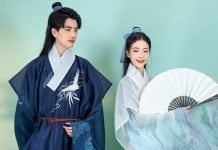 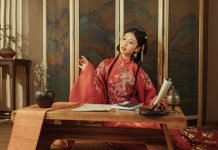 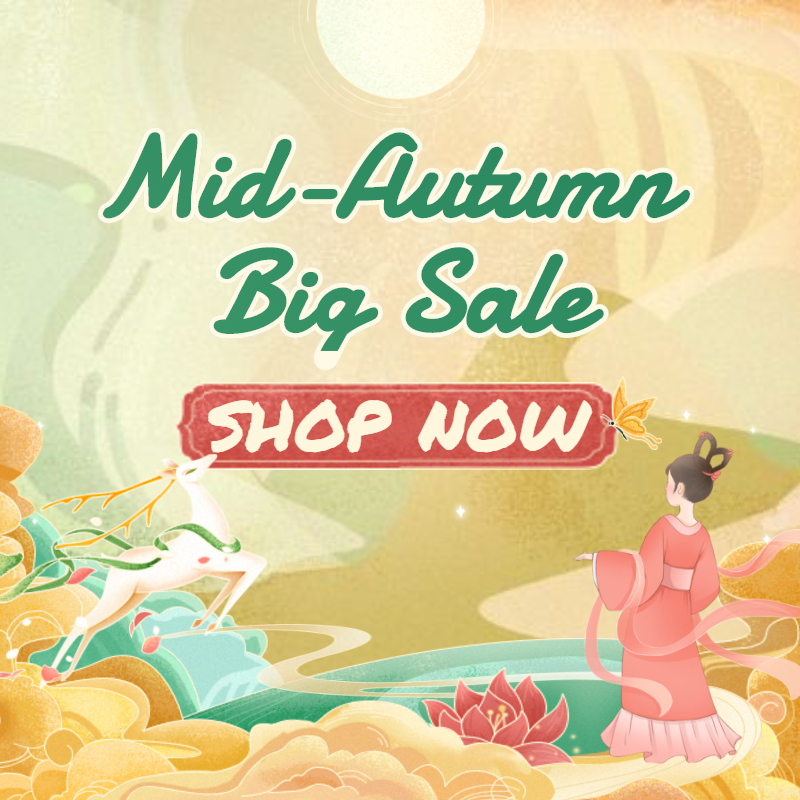 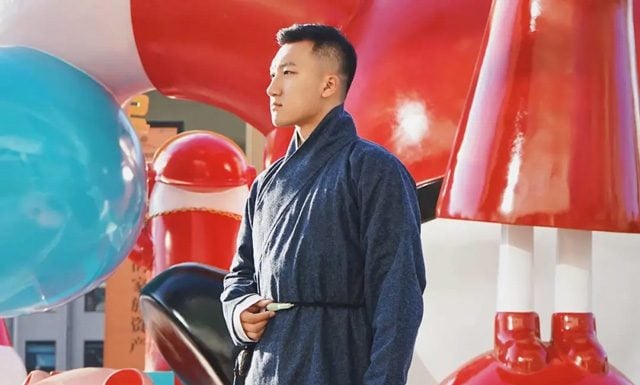 In the Spring, You Can’t Miss These Hanfu Photos.