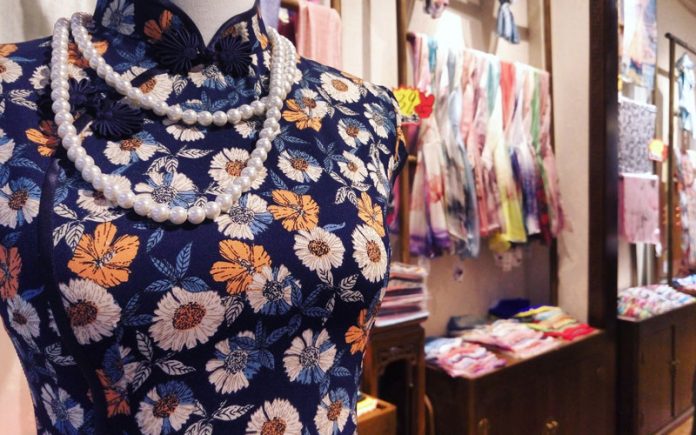 Cheongsam (literally, long shirt/dress), also known as Qipao or Mandarin Gown, was a type of feminine body-hugging dress with Manchu and Western elements. It was first used as uniforms of Shanhai girl schools at the time of Republic of China period (1911-1949). Back then, it was very popular for representing the images of new era knowledge females.

It was until the conducts of Reform and Opening policy in 1980s that Qipaos being prevalent again. Nowadays, Qipaos have gained more and more attentions with a great number of local and international designers involved in.

When it comes to modern Qipao’s origins, there are 3 mainstream claims. The first claim suggests that modern Qipao is only the evolutionary style of Manchu’s clothing. The second claim says western elements affects a lot on modern Qipao designs. The last claim supposes that ancient Chinese clothing plays an important role as well.

Speaking of the history of Cheongsams, the systems and policies in the Qing dynasty (1636-1912) society has to be mentioned.

Eight Banner system, an administrative division system, had been used as Manchu’s ruling tool during the Qing dynasty. At the first place, the system was only for Manchu residents, Mongols and Han Chinese were incorporated later.

With this system, Manchu, Mongols, and Han Chinese wore differently from their ordinary civilians. The clothing they wore was called Changpao which consisted of similar long robes for both men and women.

There was a period of time in the Qing dynasty (under the dynastic laws after 1636) that Han Chinese were forced to adopt the Manchu male hairstyle, the queue, and dressing in Manchu Changpao. 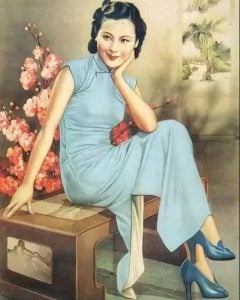 However, the order for all Han Chinese to wear Manchu clothing did not executed for a long time. Without the order, only those Han who served as officials or scholars were required to wear Changpao.

For women, Manchu and Han systems of clothing coexisted. Throughout the Qing dynasty, Han civilian women continued to wear traditional Han clothing from the Ming dynasty. As a result, Ming dynasty style clothing was retained in some places in China until the Xinhai Revolution of 1911.

Qipao can be viewed as the female version of Changpao which took a long time to gain acceptance with Han women. However, the early Manchu Qipao was very different from the Qipao we know from China today. The Manchu Qipao was not body-hugging but was indeed baggy specifically to conceal the wearer’s figure.

After the Xinhai Revolution, with the trend to resist Manchu cultures, Manchu women started wearing Han clothing for the sake of safe. At the beginning of the Republic of China, Qipao gradually faded out of people’s lives.

The version seen as the typical Qipao in China today was popularized by the celebrities, socialites and politicians of the time in Shanghai from the 1920s to the 1940s.

In this period, the government of the Republic of China conducted the opening up policy. Western lifestyles came to Chinese people’s lives in different aspects. It was in this background that many clothing designers started inventing new versions of Qipao with elements of western fashion.

Qipao had been indeed influenced by western cultures. The question should be, how big was the influence?

One of the early adopters of Qipao was one of the first lady of the Republic of China- Madame Wellington Koo. Her daily dressing style often incorporated Manchu clothing with adaptations to modern (western) styles.

Before Madame Wellington Koo, the side slit of Qipao was shorter. It was believed that she had popularized the longer side slit as is commonly seen in modern Qipao.

The tighter fit, higher cut, and the higher slit were all due to a wish for a more modern, and more westernized version of the Qipao.

The Qipao had not only popularized by the famous people from the upper class, but also the western commercials. The commercials of some big company such as Coca-Cola in China had incorporated the Qipao elements.

It is much rare to hear that Qipao has something to do with the Chinese ancient clothing compared to the first two claims.

However, some historians such as Yuan Jieying (袁杰英) argued that Qipao shares similarities with narrow cut and straight skirt which were popular during the Western Zhou dynasty (1046 BC-771 BC). 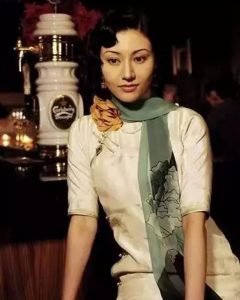 Other historians claimed the characteristic of a long one-piece dress was modeled after the clothing of the Han dynasty.

In fact, the 3 claims of the origins of Qipao could be true at the same time. It is no doubt that Qipao worn by women was transformed by Changpao worn by men in the Qing dynasty.

Also, It is rational to assume that Changpao with Manchu cultures had influenced by the Han cultures.  Later on, with the opening up policy, the designs of Qipao had added western elements.

As mentioned, Cheongpao was the early form of Cheongsam with a long rope without sleeves and collars. It was the daily outfit for Manchu Bannerman in the Qing dynasty.

It was until the 1920s, with the fall of the Qing dynasty and the establishment of the Republic of China, that Cheogsam being popular in Shanghai.

Cheongsam of the early 1920s had loose cutting, with long, wide sleeves. With the adaptations of the western cultures, Cheongsam became more fitted and body-hugging, with side slits reaching up to the thigh. More and more distinct designs were unveiled and Cheogsam became a fashion trend. 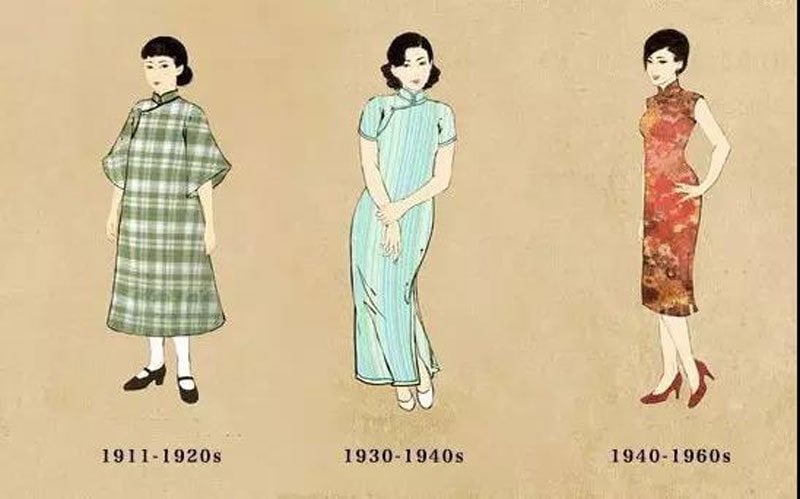 In 1929, Cheongsam was chosen by the Republic of China as one of the national dresses. In the 1930s, the fashion prevailed in Shanghai. At that time, Cheongsam was made of silk and embroidered with pearls and other decorations. Also, they were close fitting, and drew the outline of the wearer’s body.

In 1940s, Cheongsam was worn with stockings, and trousers had completely fallen out of use. High-heeled shoes became an essential part of Qipao fashion set. 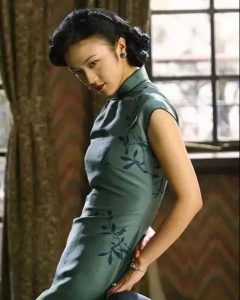 From the 1950s to the 1970s, due to the anti-tradition movements in China, especially between the Chinese Cultural Revolution (1966-1976), the Cheongsam was seen as a feudal dress of the ancient times. It was abandoned as daily clothing, and people who wore Cheongsams were judged as being bourgeois, which was considered a political misbehavior at that time.

Since 1980s, with the trend of reevaluation of Chinese traditional culture, people in mainland China started to pay attention to Cheongsam again. Cheongsam was gaining popularity in films, beauty pageants, and fashion shows in both China and other countries all over the world.

In 1984, Cheongsam was specified as the formal attire of female diplomatic agents by the People’s Republic of China.

Many airlines in Asia such as China Airlines, China Eastern Airlines, and Xiamen Airlines, have Cheongsam uniforms for their women flight attendants and ground workers. These uniform Cheongsams are in a plain color, hemmed just above the knee, with a close-fitting wool suit jacket of the same color as the Cheongsam.

Apart from airlines, Cheongsam are commonly worn as a uniform for hostesses in Chinese restaurants or serving staff at luxury hotels. 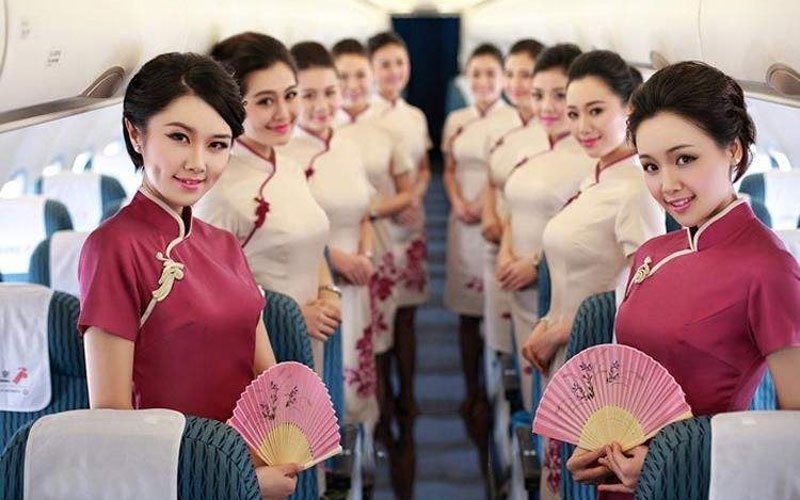 Some primary schools and secondary schools in Hong Kong, especially older schools established by Christian missionaries, use a plain rimmed sky-blue cotton and dark blue velvet (for winter). Cheongsam with the metal school badge right under the stand-up collar to be closed as the uniform for their female students. 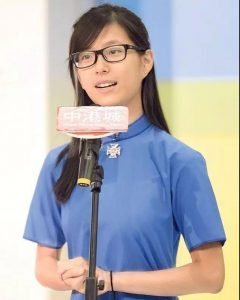 These Cheongsams are usually straight, with no waist shaping,  and the hem must reach mid-thigh. Cheongsam fit closely to the neck, and the stiff collar is hooked closed, despite the tropical humid and hot weather. Although the skirts have short slits, they are too narrow to allow students to walk in long strides. The seams above the slits often split when walking and are repeatedly sewn.

Many schools also require underskirts to be worn with Cheongsam. The underskirt is a white cotto full slip, hemmed slightly shorter than Cheongsam, and have slits at the sides like Cheongsam, although the slits are deeper.

A white cotton undershirt is often worn underneath the Cheongsam. The Cheongsam’s length, styling, color and sleeve length varies between schools. 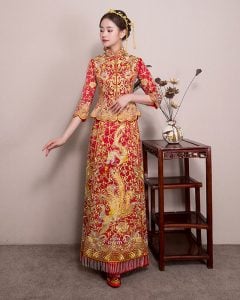 In Western weddings, Chinese brides or brides marrying into a Chinese family, will often wear Cheongsam for a portion of the wedding day.

It is common for many brides to have both a traditional white wedding dress and a Cheongsam that they wear during the tea ceremony.

Cheongsam styles have also evolved to be more modern from mermaid silhouettes to semi-traditional styles that feature a Cheongsam top with softer details like lace and a looser skirt.

In contemporary China, the meaning of Cheongsam has been revisited again. It now embodies an identity of being ethnic Chinese, and thus is used for important diplomatic occasions.

Since 2013, Peng Liyuan, the first lady of China, has worn Cheongsam several times while on foreign visits with Chinese president Xi Junping.

In November 2014, Cheongsam was the official attire for the political leader’s wives in the 22nd APEC meeting in Beiging. 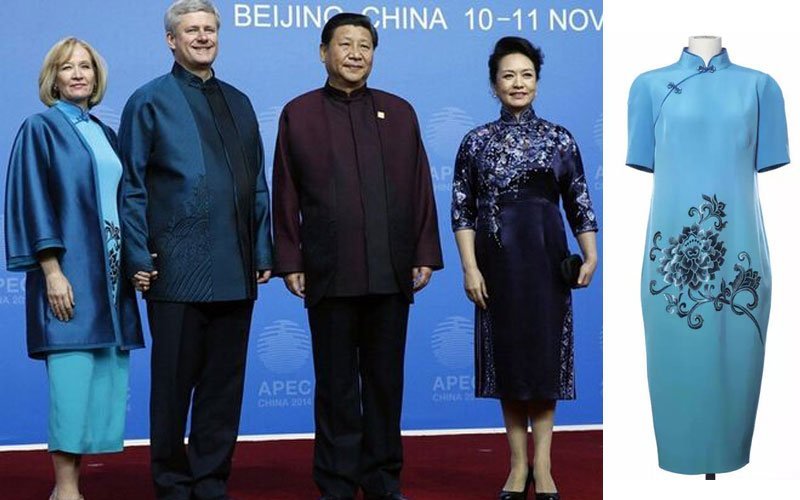 Qipao, especially the modern one, is a very classic product to represent the beauty of Chinese’s traditional clothing. It reveals not only the history of the Han Chinese, but also the footprints of other ethics and cultures on the land.

With globalization and the advance of technologies, the concepts of national border will no longer existed in a very near future. Qipao is born with the communications of various cultures, it represents the best spirit of earth village.

Wear Qipao, be a resident of the new world. 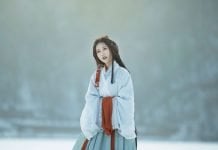 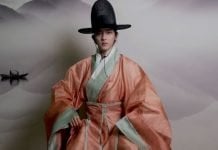 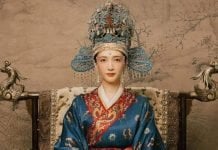 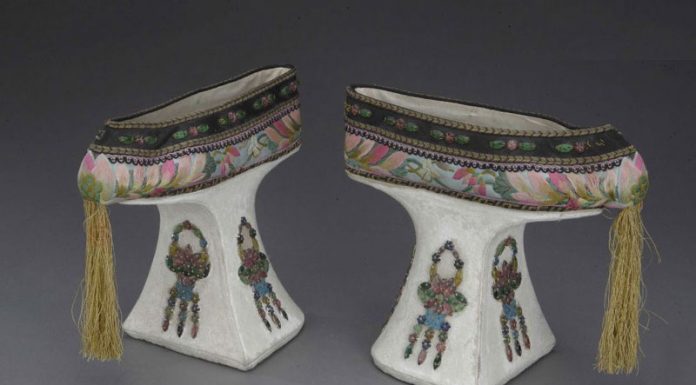 How to Wash Hanfu

How to Take Hanfu Picture Easily at Home?