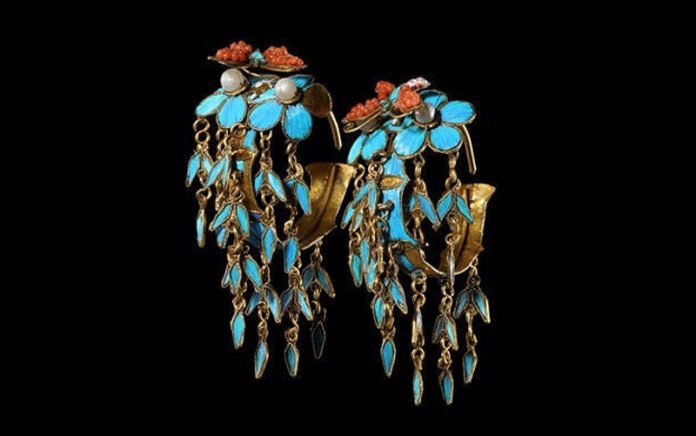 Chinese Traditional earrings are of various types, both decorative and ceremonial, and have been an indispensable part of people’s decorations since ancient times.

The popularity of Chinese Traditional Earrings

The first appearance of earrings can be traced back to the Neolithic period. At that time, people’s craftsmanship was limited to a certain extent, so earrings were usually in the shape of simple rings with notches and were called “Jue (玦)”, mostly made of jade, but also bone, stone, agate, and ivory.

Later, with the development of dynasties and civilizations, earrings became richer in style, with different styles such as earrings, earrings pendants, and so on. However, earrings have not always been a symbol of beauty in a long history. In ancient China, women’s status was far inferior to men’s, so people came up with the idea of piercing holes in women’s ears and hanging earrings to remind them to act cautiously, in order to restrain their behavior.

In the olden days, until a girl was 10 years old, her mother or other elders would repeatedly be grinding with rice grains over the girl’s earlobe to numb it, then pierce it with the tip of a needle, and then wear a piece of silk thread, which would form an ear-piercing over time. 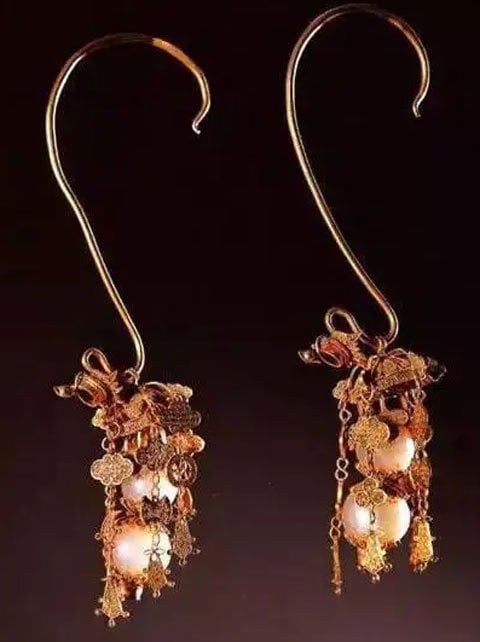 It wasn’t until the Tang Dynasty, when the status of women was much higher, that the practice of women wearing earrings became less common. By the Song and Ming Dynasties, earrings were widely accepted and were worn not only by ordinary women but also by empress and concubines. It was not until the Song and Ming dynasties that earrings changed the previous trend of confinement and became popular as an accessory on women’s dressing tables.

The Song dynasty was an aesthetically pleasing dynasty, and women’s pursuit of beauty in earrings could not be separated from this period. During the Song dynasty, women’s earrings were very colorful and elegant. The earrings were often made of gold and silver in the shape of a flower, and were then inlaid with various gems on the petals or leaves of the flower, or even a pearl in the middle of the pistil. 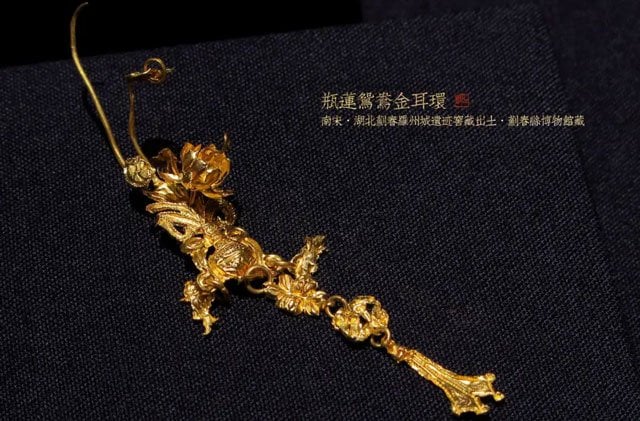 One of the most exaggerated and popular useful gold wire made into “S” shape, one end for pointed, one end into a sheet, in the sheet in relief carved flowers on the earrings. There are also in the gold embossed on the embellishment, and then the two pieces of composite, and then put two symmetrical shapes in the middle on the earrings. 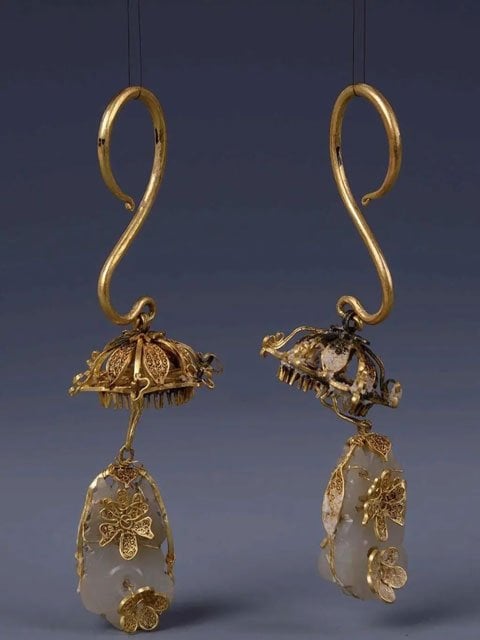 During the Ming Dynasty, earrings were more common and popular, and it was the first dynasty to include earrings in its dress system. One of the most popular styles was the gourd (Hulu, 葫芦)shaped earring, which was worn by everyone from royalty to commoners. The popularity of gourd earrings is closely related to the Ming Dynasty’s imperial belief in Taoism. The gourd was a Taoist magic object and was also pronunciation similar to the word “Fulu (福禄, good fortune)”, which is why it was so popular. 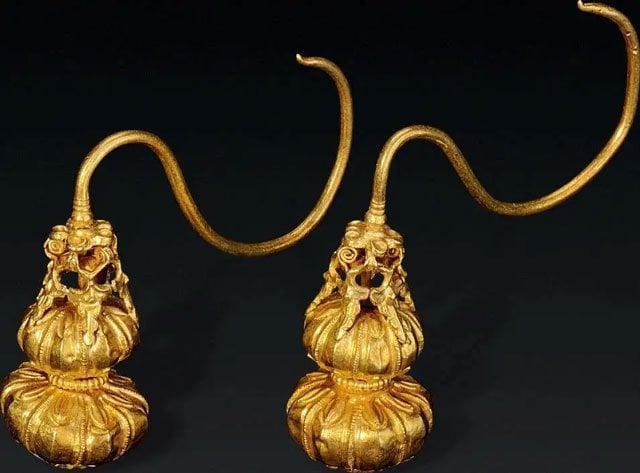 However, among the many earrings, the most distinctive would have to be the “one ear and three Qian (一耳三钳, Qian=earring)” system of the Qing Dynasty. As we all know, the ruler of the Qing court is Manchu, so in order to highlight the dignity of Manchu women, but also in order to distinguish from the Han people, the rulers of the Qing required Manchu women, whether commoners or nobles, follow the system of wearing “one ear three Qian”. Wealthy women will use gold, silver, jade, jade for the Qian, while the relatively poor women will be replaced by copper material. 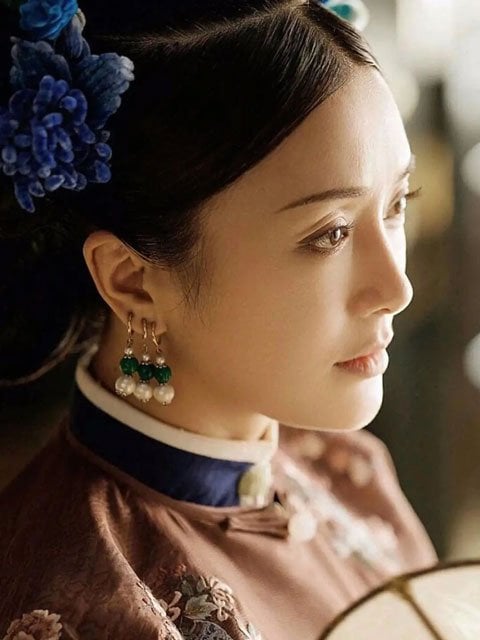 Among all jewelry categories, earrings are like the faintly twinkling stars in our ears, accompanying us across thousands of years of practice and creating a different kind of scenery. It’s design and production in different times and environments reflect the exquisite craftsmanship of ancient people in the processing and inlaying of gold, jade, and precious stones. 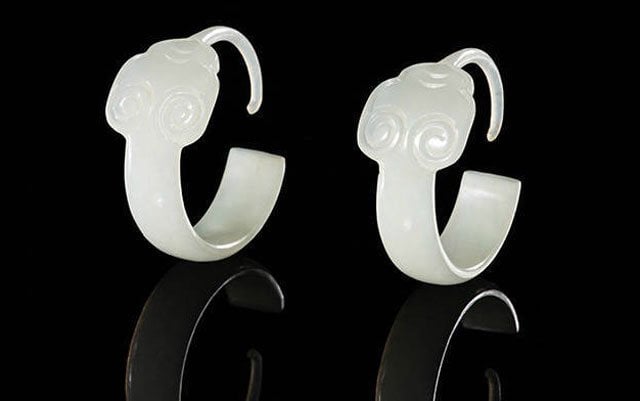 As jewelry, it delightfully beautified and decorated the lives of women. As a symbolic object of the ruling class, it also truly reflects the transformation, rise, and fall of the Chinese ruling class culture. Although the process of its development and evolution has been full of twists and turns, it still cannot resist people’s love for it. 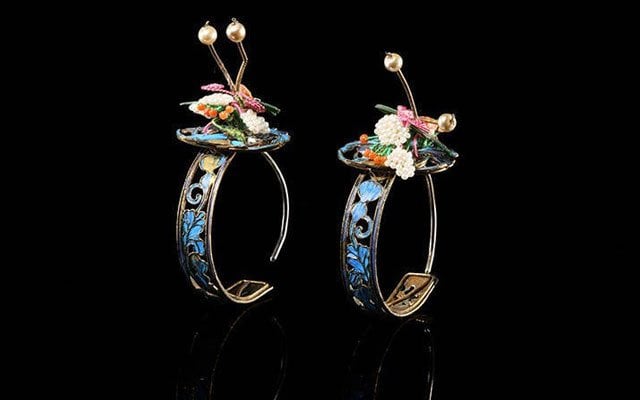 Nowadays, with the improvement of craftsmanship and the use of more sophisticated materials, people are becoming more and more interested in earrings, and various styles have emerged, pushing traditional Chinese earrings to the height of fashion. 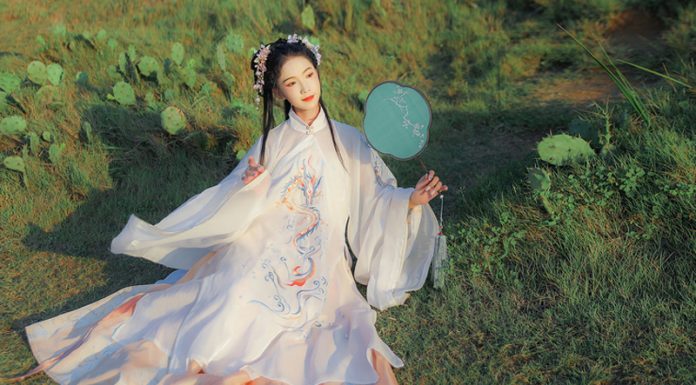