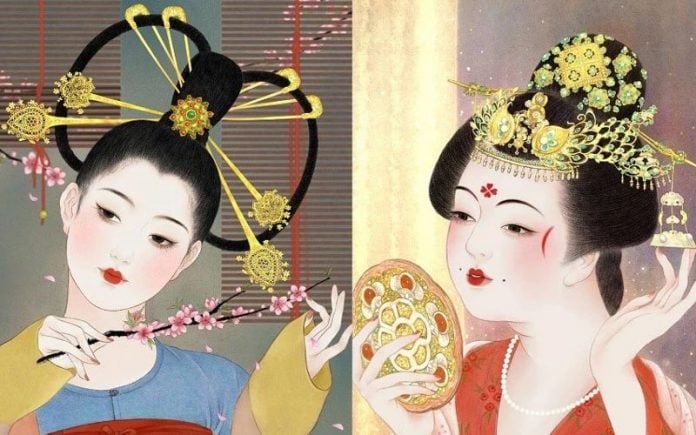 It is every woman’s nature to love beauty, and modern women have a common hobby – buying jewelry, and when they see jewelry with good design, they are always delighted and want to buy it as soon as possible. Hanfu girls are no exception, and they often use different styles of Hanfu jewelry to match their Hanfu when they go out in Hanfu clothing. For women, Hanfu jewelry is the best weapon used to adorn themselves and shine in the crowd with elegance and beauty.

But you may not realize it, the Sui and Tang dynasties’ women were much more particular about Hanfu jewelry than we are today, especially the high officials and noblemen of the time. The aristocratic ladies in their gorgeous clothes, who dressed up every day like “a lotus flower”, looked like a pair of beautiful paintings from afar.

Archaeologists have studied many Hanfu jewelries that were unearthed during the Sui and Tang dynasties, and from behind those artifacts, they have discovered that the women who wore those gorgeous Hanfu clothing actually had a legendary life story that was hidden from the public.

In the following pages, we will talk about the trend of the unearthed Sui and Tang Hanfu jewelry and the touching stories behind them in the book China Fashion by Zuo Qiu Meng and Mochun.

The Golden Bough of An Early Death – Li Jingxun

In 1957, the Institute of Archaeology of the Chinese Academy of Sciences excavated a Sui tomb outside the Yuxiang Gate of the Western Wall of Xi’an, Shanxi Province.

The tomb was small in scale but was rich in burial goods. Among them, many jewels are the most exquisite. From the tombstone, we know that the owner of the tomb was Li Jingxun, a noble daughter of the clansmen of the Northern Zhou and Sui dynasties.

Yang Lihua had only one daughter with Emperor Xuan of Zhou, Yu-Wen Eying, who was born in the early years of the reign. In the early years of the reign of Kai Huang, Yang Lihua chose a son-in-law for her daughter, who was then waiting to be chosen by the palace, but Li Min, who was handsome, good at archery, and good at singing and dancing, was chosen by Yang Lihua. When Yu Wen Eying got married, the wedding was a grand affair, as if the emperor was marrying his daughter, and Yang Lihua took advantage of her special status to get her only daughter’s husband a high-ranking official, “Zhuguo”.

Li Jingxun was the fourth daughter of Li Min and was raised by her grandmother Yang Lihua in the palace. But her short life was not prolonged by her illustrious family and grandmother’s love.

In the sixth month of the fourth year of the Emperor Yang’s reign (608), the royal family escaped from the summer heat at Fenyang Palace (located in Ningwu County, Shanxi Province), but Li Jingxun, unfortunately, got sick and died in the palace at the age of nine.

Although Li Jingxun did not have a title before her death, her funeral was very special.

She wears a hairpin with a flowering tree as a symbol of her clan’s noble status, a gold necklace with exotic stones, and a pair of gold bracelets and gold rings on her hands, surrounded by exotic treasures.

Li Jingxun’s early death, though unfortunate, enabled her to escape an even more unfortunate family fate. In 609, her beloved grandmother Yang Lihua died the year after her death. In 614, her father Li Min was executed because of the suspicion of Emperor Yang, and a few months later her mother Yu Wen Eying was poisoned with poison.

In the tenth year after her death, the Sui dynasty, which had once been a great dynasty, vanished into thin air.

The gold, silver, bead, and flower hairpin worn by Li Jingxun was known as a “flower tree” or “flower hairpin,” and was closely related to the fated-woman system that defined the rank of noblewomen, and was used by noblewomen to show their status when they wore costumes. Depending on their status, the number of flowering trees they could use varied.

Although it was possible to distinguish between the ranks of the noblewomen, it was difficult to distinguish between them when they were gathered together in a large group and all had a cluster of golden trees shining on their heads. At this time another ornament ” Bao Dian “（gold flower） is also added to the headdress, its shape is like a lotus flower petal, the number is also the same as the flower tree in accordance with the status of the destined women change.

The Princess of the Southern Land – Yangshi

In 1980, archaeologists excavated a large tomb of the Tang dynasty in Anlu, Hubei province. In the tomb, a tomb marker was unearthed, with the inscription “Consort Yangshi of Wu Guofei of the Great Tang Dynasty” on the lid, which indicated that the owner of the tomb was the wife of a certain King Wu of the Tang Dynasty.

King Wu Li Ke’s father was Emperor Taizong Li Shimin of Tang and his mother was Princess Yang, daughter of Emperor Yang of Sui. The princess Yang, whom his parents married for Li Ke, was also a collateral descendant of the Sui Dynasty clan. As a prince, Taizong once considered making Li Ke the crown prince, but Taizong eventually chose Li Zhi as the crown prince.

When Li Zhi became Gao Zong（唐高宗）, Zhangsun Wuji（长孙无忌）, as the uncle of Gao Zong, deliberately implicated Li Ke in a case of rebellion. Li Ke, who was then serving as the governor of Anzhou, had to say goodbye to his wife and go to his death alone.

Anticipating her husband’s fate, Wu Wangfei died before him and was buried alone in Anzhou.

The two flower pins found in the tomb of the Princess Yang of Wu, the headpins are twisted and coiled with thin gold filaments in a multi-layered pattern, one with a five-petal flower outline and a pair of birds in the middle, the other with a mother-of-pearl pattern similar to that of a lotus petal. The edges of both flower pins are decorated with small flowers cut into the gold foil.

The mother-of-pearl hairpin adorned on the head of Princess Yang of Wu was called “gold-encrusted jewelry hairpin” by the Tang Dynasty people, which could be abbreviated as Tin hairpin in the ritual system.

In the Tang Dynasty, this type of Tin hairpin was used by noblewomen in conjunction with the ceremonial crown and inserted into the side of the crown. According to the ritual system at that time, when the empress and dauphine meet guests at banquets, and when the mother or wife of officials meet with guests, say goodbye, and attend ceremonial meetings, they are required to wear dresses and gold and green flower inlay on their heads.

The Daughter of the Clan – Li Chui

In 2001, the Shanxi Provincial Institute of Archaeology excavated a small tomb in the southern suburbs of Xi’an during the Tang dynasty.

From the tombstone, it is known that the owner of the tomb was a daughter of Li Tang’s clan, named Chui, also known as Shuxian. In the coffin, there were various kinds of jewelry and mirror boxes used by women for dressing.

Her waist was tied with a Yingluo made of pearls and flower-shaped jewelry made of gold and jade, and her head was adorned with a crown of gold flowers inlaid with pearls, clamshells, turquoise, agate, crystal, rubies, and other jewels.

Li Chui’s father was King Sishu – Li Jin. As a daughter of a noble clan, Li Chui did not choose to marry into a family, but rather looked forward to a love affair between two lovers, and unhesitatingly married her lover, Hou Mo Chen (侯莫陈氏), who belonged to a modest but prosperous family.

In 736, just after giving birth to a child, Li Chui suddenly fell ill with a disease and died on the 7th day of the first lunar month at the age of 25. Due to the status of the Hou Mo Chen family, they could not go beyond the system of using high-quality funerary objects and had to place all kinds of beautiful jewelry in his wife’s coffin.

In the tomb, the jewels with a spherical shape at the top are well-preserved, with a gold basket Baodian (a type of jewel that is decorated with precious stones) in the center of the front and flower-shaped jewels made of gold and jade interlaced around it. These ornaments were supposed to be attached to the fabric so that they could be worn directly on top of the head and were extremely ornate ” Baoji” (an ancient type of hair chignon for women).

In front of the Baoji, the main body consists of a pair of opposing peacock wings and tail feathers braided with gold filigree; in the center, a garland of twisted gems; and at the bottom, a long, lotus-shaped pedestal decorated with small flowers decorated with jeweled beads.

On both sides of Li Chui’s Baoji are small ornaments of birds standing in pairs on flowering branches, with small beads that can be moved underneath.

The lives of three distinguished women of the Sui and Tang dynasties were marked by ups and downs, and the Hanfu jewelry unearthed in their tombs is of high appreciation value.

If you want to know more Hanfu jewelry, please join our community! 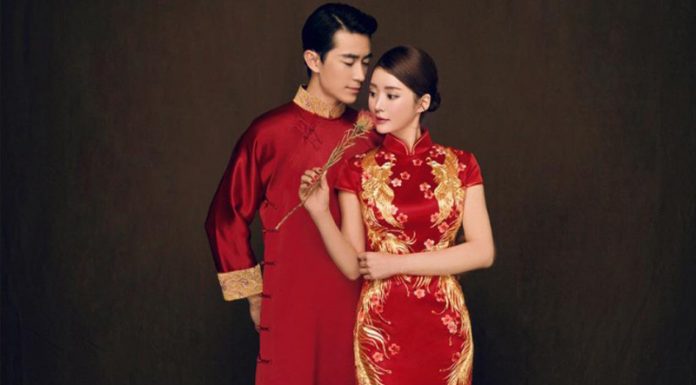