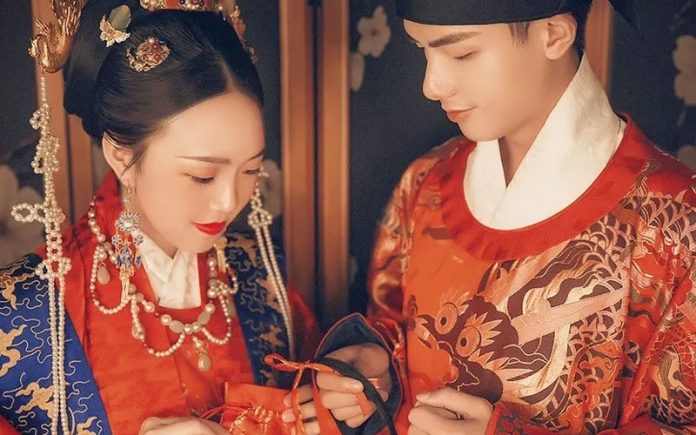 Modern people restore the traditional Chinese wedding, they roughly sum it up as follows 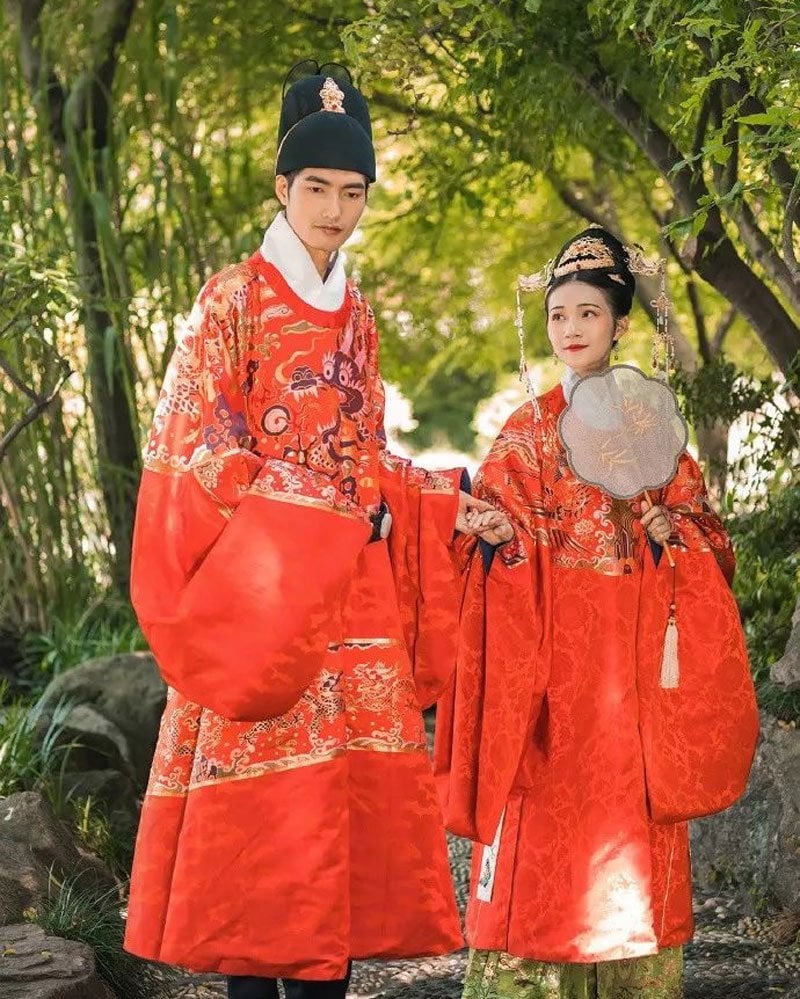 As we all know, culture is the life of a nation, and etiquette is one of the main signs of all civilized nations and an important window of national culture. As the Chinese nation with a long civilization of 5000 years, attach great importance to marriage.

Due to the progress and great changes in society, it is impossible to return to the pre-Qin wedding completely. The wedding ceremony and custom in each historical period are not only in the same line, but also have their own charm. 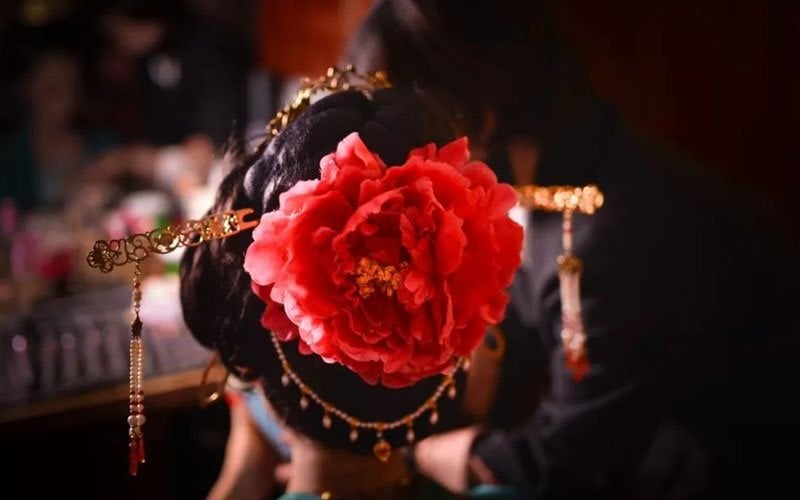 Zhou Hanfu wedding is the prototype of the Chinese wedding, and the later Han wedding gradually evolved on the basis of the Zhou wedding. The ceremony was solemn and elegant, fully reflecting the ancient charm of the Chinese wedding culture. Weekly weddings don’t play music or celebrate. Wedding emphasis is placed on the etiquette and feelings between husband and wife. It’s not a noisy thing.

Nacai (纳采, access to the woman’s home through the matchmaker)

Nacai is to discuss marriage. The man wants to marry the woman. The man sends his matchmaker to the woman to propose marriage. Use wild geese as meeting gifts.
There are three symbolic meanings of the ceremony of wild geese: 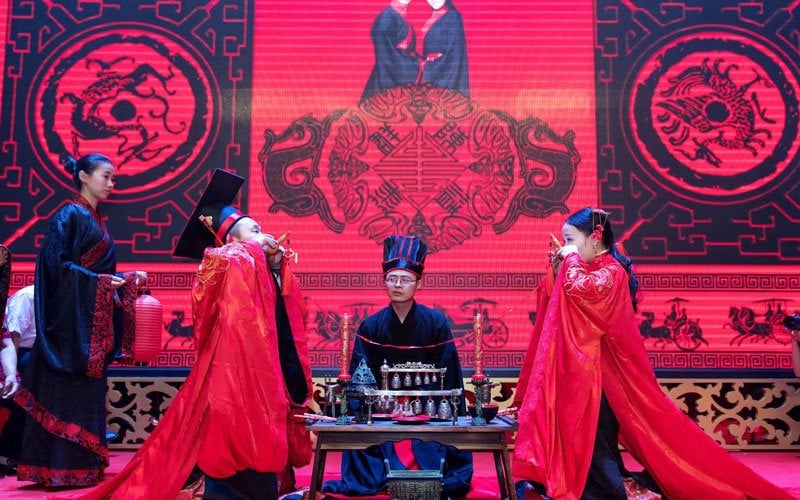 After asking for the women’s consent, they will have Wenming ceremony. The husband’s family decides whether to get married or not through divination and what are the good and bad luck. Generally, they ask for information such as women’s name, rank, date and time of birth.

The purpose of Wenming is to prepare Naji. After divination, if get auspicious omens, send the matchmaker to the women’s home to report the auspicious results. After Naji, the marriage will be officially determined.

Nazheng is often the key to marriage. Betrothal gifts are sent to the bride’s house. After Nazheng, the marriage enters the formal preparation stage. 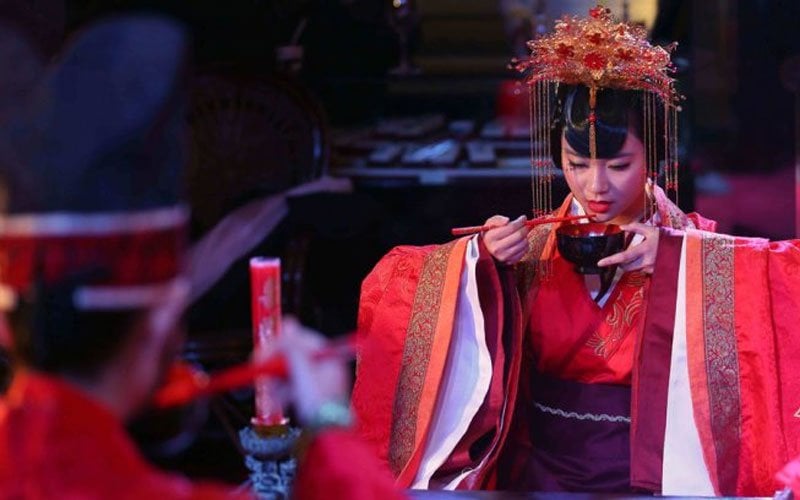 Qinying (亲迎, send a party to escort the bride to the groom’s house) 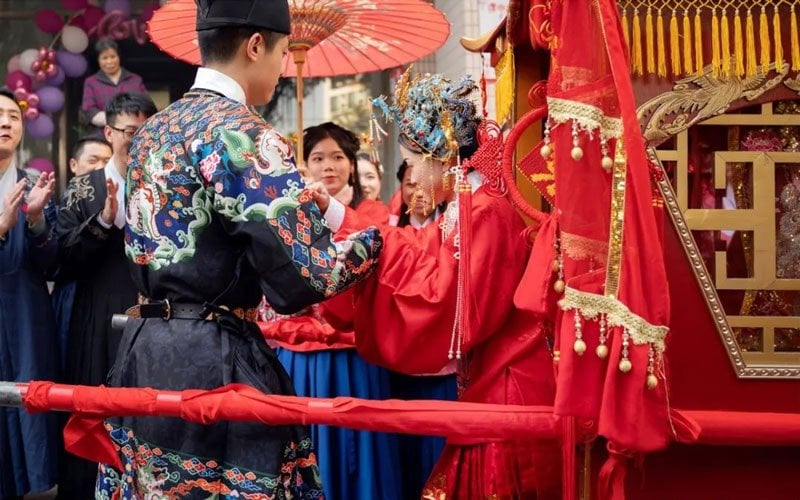 After the bride is received into the bridegroom’s house, the ceremony of formal marriage is held.

The bride and groom must wash their hands and face before entering the wedding hall, which means to wash away the dust and live a relaxed life. 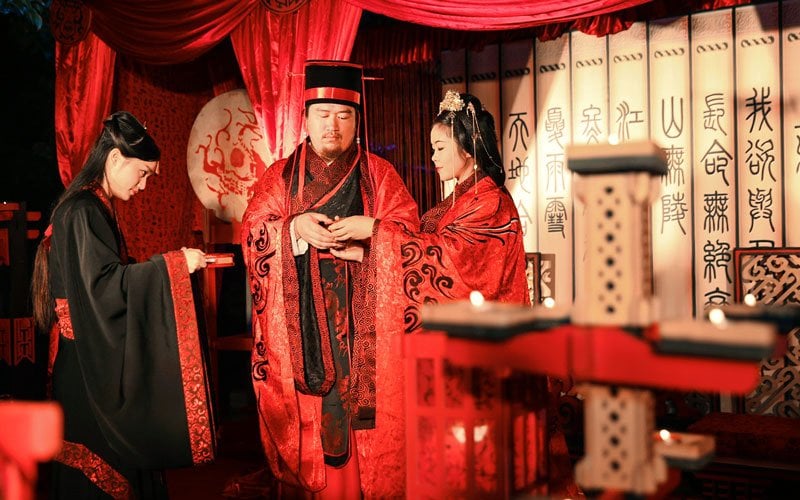 Newlyweds should sit opposite each other. The bridegroom is in the west seat, and the bride is in the East seat. 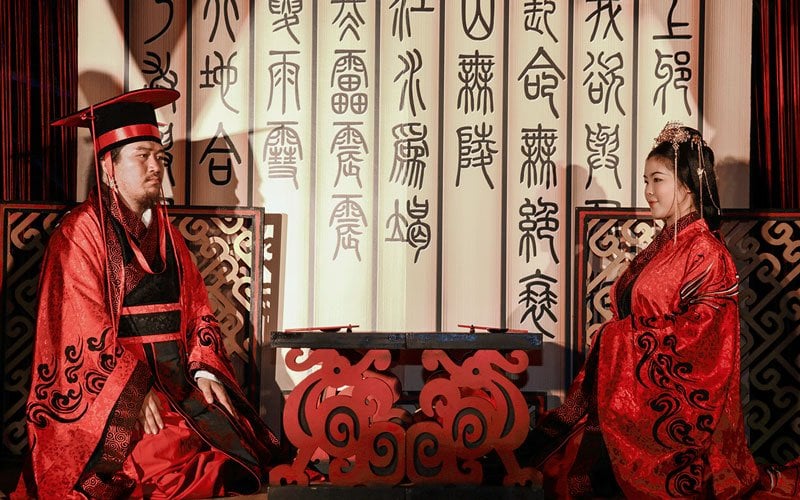 Tonglao (同牢), newlyweds eat meat from the same animal together;

Hejin (合卺), it means that the newlyweds drink half a glass of wine first, and then exchange the glasses and drink it all at once. It not only symbolizes that the husband and wife will get married forever, but also has the deep meaning of making the bride and bridegroom share weal and woe. 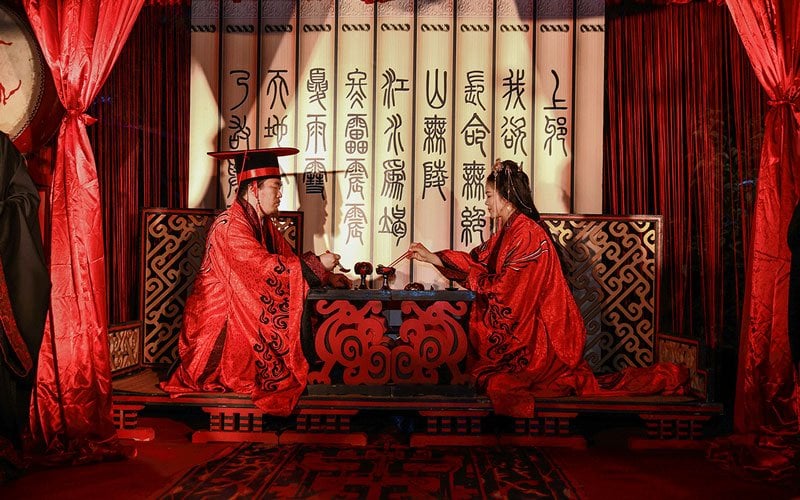 Tonglao Hejin is the most socially significant part of a wedding. It is a necessary ceremony for every newlywed couple.

This is commonly known as the bed ceremony, officially become a husband and wife. The bride’s and groom’s undressing is accepted by the waitress, and the bridegroom takes off the cover of the bride’s head. At this time, the waitress comes out with a candle. After that, both men and women formally married.

After the marriage ceremony, the bride becomes a part of the new family.

The bride calls her husband’s father “Jiu” and her mother “Gu”, the next morning after the wedding, the bride gets up early and bathes. The bride takes the bamboo with Chinese date (枣) and chestnuts and waits outside Jiu and Gu’s bedroom door.

The ceremony of “Fukui Jiugu” is followed by “Fujian Jiugu”. The bride herself serves the Jiu and Gu to eat. After finished eating, the bride should eat the rest of the Jiu and Gu’s food symbolically to show respect and filial piety. Another said, “Fukui Jiugu” means that on the third day after the wedding, the bride will cook in the kitchen to be filial to new parents.

Jiu and Gu treat the bride with wine and food to show the care of the elders.

At that time, the wedding dress was not the red that people misunderstood, but the solemn Xuan color dress (Xuan color, with slight red in the black, is the most sacred color.)

The whole ceremony was peaceful. But there’s a powerful force in the quiet and meticulous rituals – maybe that’s what we want to capture today. The quiet and beautiful ceremony reflects a long lost civilization – the pure, beautiful and Great Han civilization. The marriage system of the Zhou Dynasty advocates elegance and decency, and has a strong sacred feeling and symbolic significance. Therefore, until the Song Dynasty, the system of the Zhou Dynasty was strictly followed.

There are many similarities between Tang Hanfu wedding and Zhou Hanfu wedding, but with the development of history, there are also some new changes.

On the day of welcoming the bride, the groom led the drum band, the honor guard and sedan(轿子) to the bride’s house, which was very lively along the way. Before the bride gets on the sedan, she dresses up in her boudoir. At this time, there is a process of urging makeup and poetry of urging makeup. Generally, the groom sings by himself or the guests do the work. After leaving the boudoir, the bride should step over the saddle to show that the family wishes her a safe journey to her husband’s home and a smooth arrival. 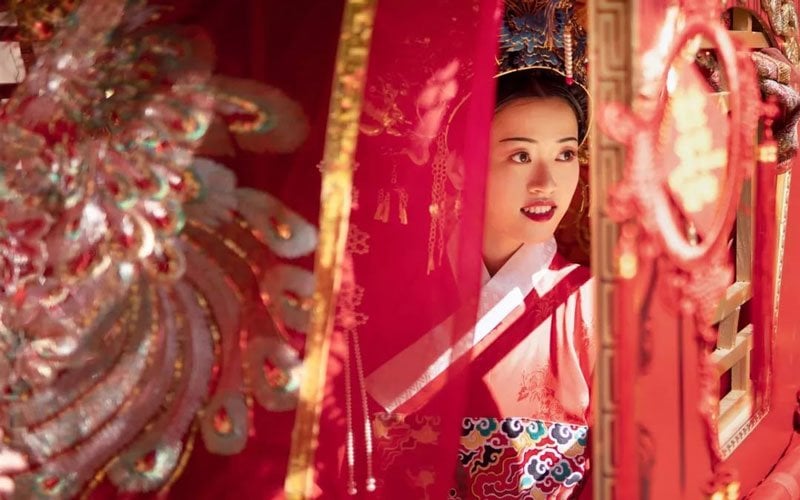 When the bride arrives at the bridegroom’s house, people other than her parents need to go out the back door and come back from the front door, which means to follow the bride’s footsteps. After the bride enters the door, she first worships the stove, then the gods and ancestors, and then the husband and wife pay homage. In the Tang Dynasty, the bride not only paid homage to her parents-in-law and her husband’s elders, but also to the guests.

And then there’s rough horseplay at weddings (闹洞房), then the newlyweds enter the new house to drink the joyous wine together, which will be called “drinking wine”. The bridegroom and bride once more bowed to each other, and then sat on the bed, right of the bridegroom and left of the bride. At this time, a large group of women began to sprinkle money, which was engraved with the words “longevity and wealth”. At this point, the wedding ceremony ended.

In ancient times, the use of color was particular and hierarchical. In short, in ancient times, when a man was an official, the dress is red, representing status and identity, and women wear green clothes and draw beautiful eyebrows. Some people think this is the origin of the red Chinese wedding dress. 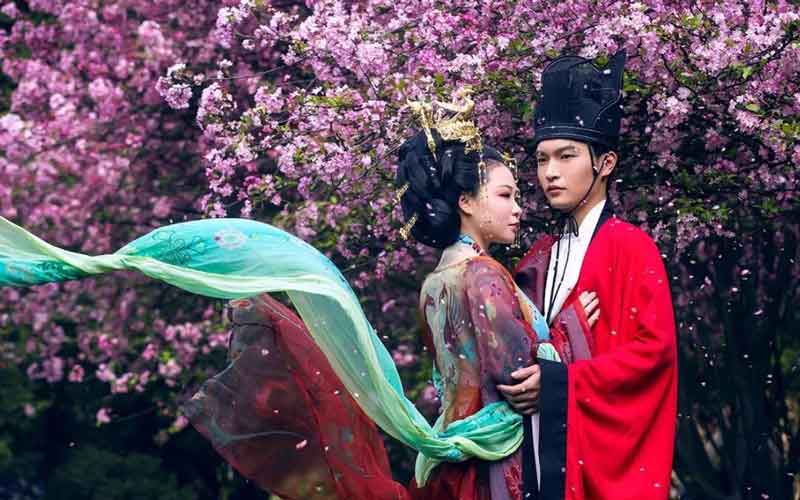 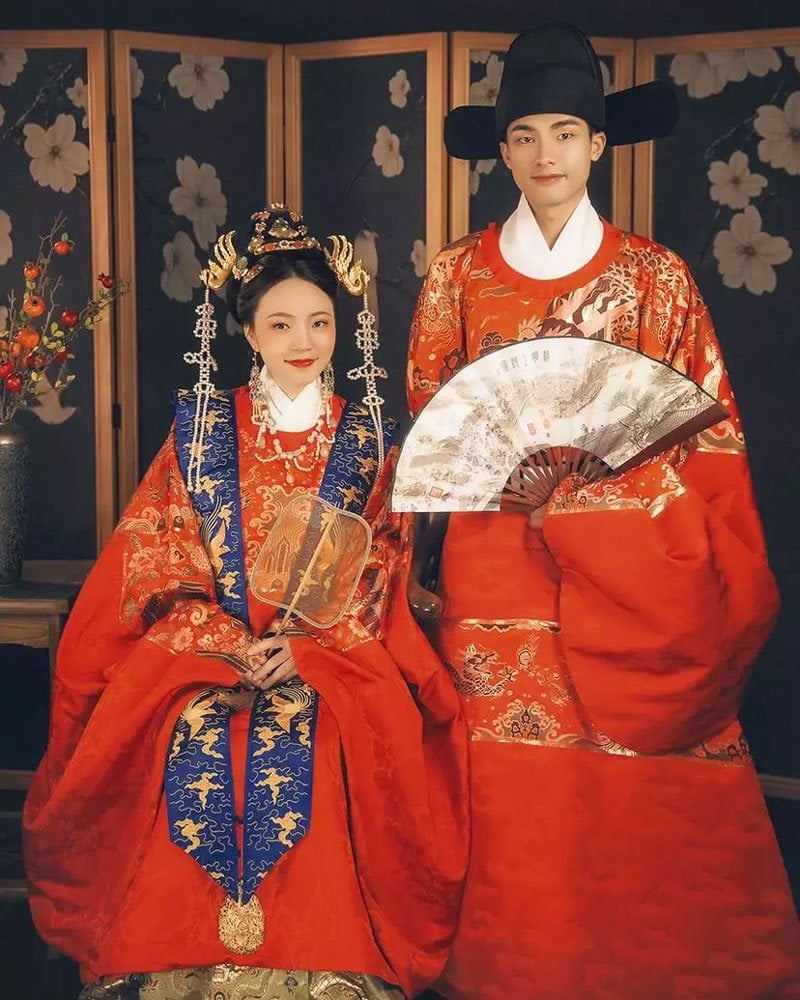 Now more and more young people are learning and adding the etiquette of Hanfu to their wedding, which is not only full of the sense of ceremony, but also embodies the expectation and love for the other half in the details. 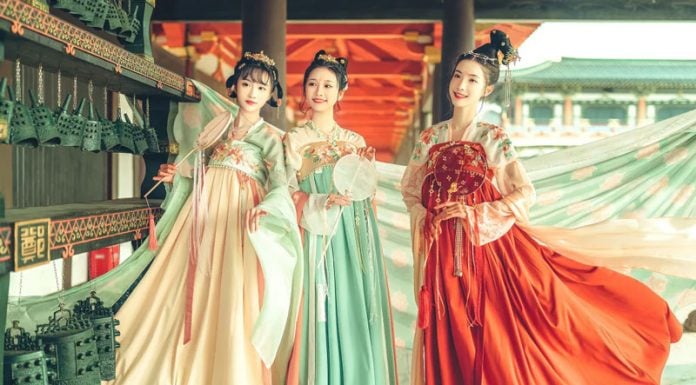 You Need a Flying Fish Robe to Become a Knight-errant