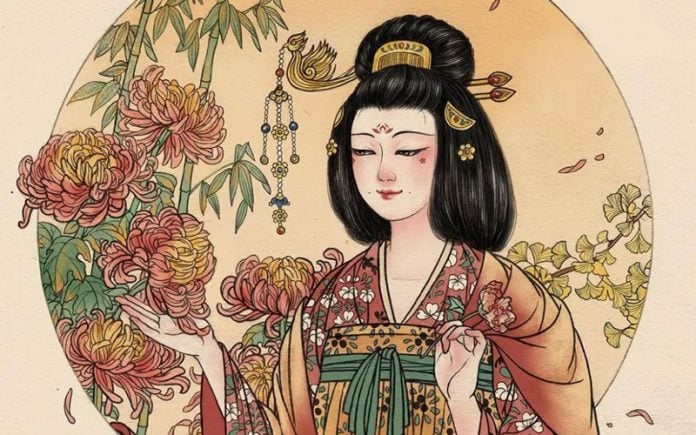 As we all know, the Tang Dynasty had unprecedented national power, strong economic strength, people lived in peace and happiness, and the people’s pursuit of fashion is also increasing. Today for you to introduce the women fashion items in the Tang Dynasty, let’s take a look at Chinese historical fashion together.

The movie “The Assassin” released in 2015, in which the female protagonist Nie Yinniang is dressed in a black robe, wearing a very fashionable belt at the waist, which is a popular “Diexie belt” in the Tang Dynasty. 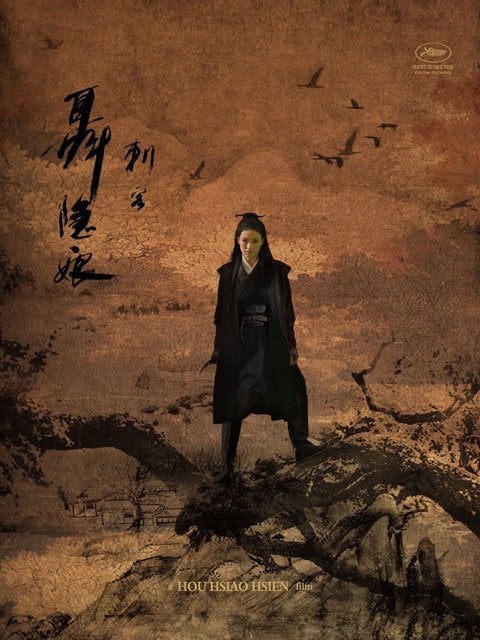 Diexie belt was originally a kind of waist belt of the Hu people, since the Wei and Jin Dynasty, introduced into the Central Plains, to the Tang Dynasty was once set as civil and military officials must wear something.

An antique Tang dynasty Diexie belt, now in the Shaanxi Provincial Institute of Archaeology. It is 1.5 meters long and 1.2 centimeters thick and is made of white jade, some of which is light green. The jade belt is made of using traditional decorative techniques, inlaid gold in Hetian white jade, and the quality of the jade is warm, luxurious, and beautiful. 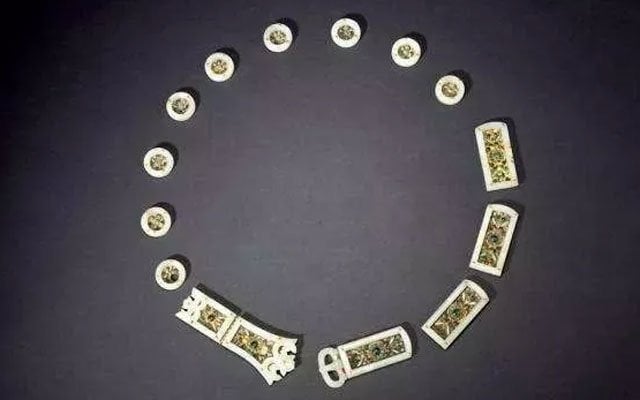 The women of the Tang Dynasty were extremely good at innovating their hairstyles. Beautiful hairstyles give people high artistic enjoyment. During the Tang dynasty, women used to wear more than 30 kinds of bun: high bun, flower bun, low bun, small bun, phoenix bun, double bun, wooden bun, and so on. 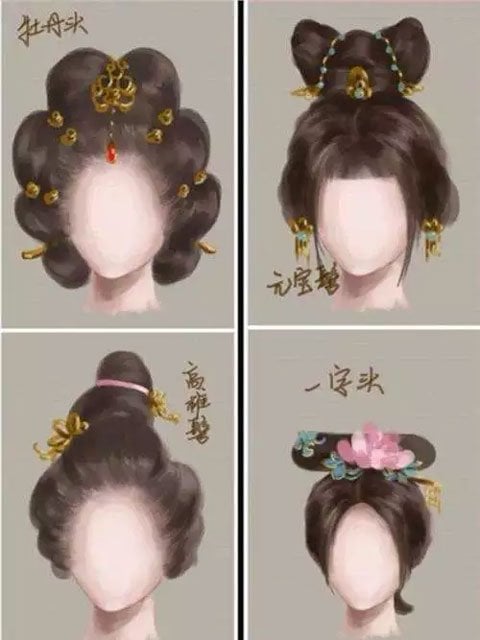 In the mid to late Tang dynasty, the trend of women combing their hair in high buns led to the popularity of Insert comb. Initially, a single comb was inserted in front of the bun, engraved with an elaborate floral pattern. Later, the number of combs inserted gradually increased, with two combs inserted in groups of two, with the top and bottom opposite each other. By the late Tang Dynasty, when women were in full dress, three sets of combs were inserted in front of the bun and on either side of the bun. This shows the importance and complexity that women of the Tang Dynasty placed on the gracefulness of the bun. 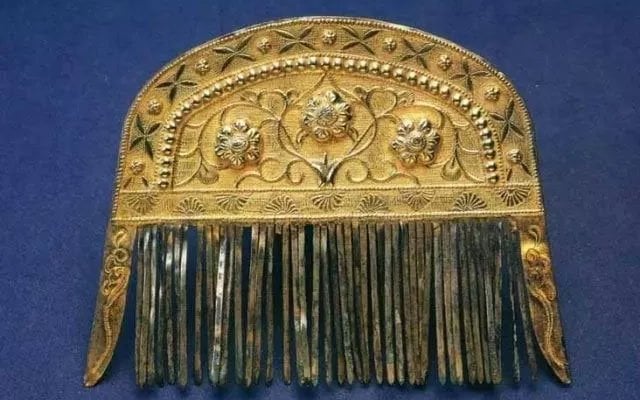 In Daoliantu (捣练图) by Zhang Xuan, a Tang Dynasty painter, there is an image of the woman with combs insert in hair: 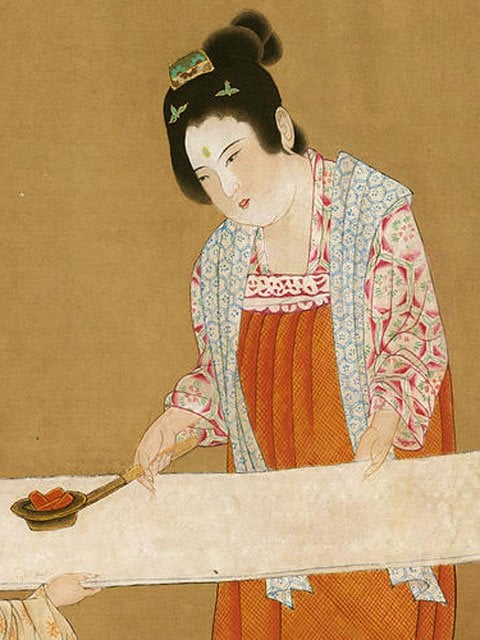 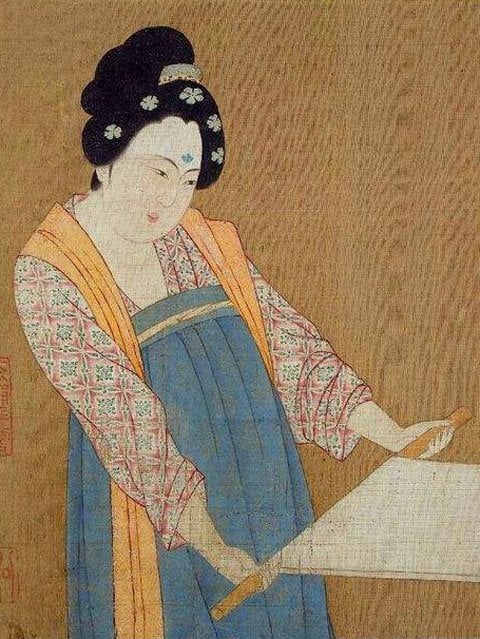 The Tang dynasty also popular a kind of gold Shubei which was attached to the back of the comb teeth and only the size of a finger. The Tang dynasty antique Shubei, now in the Shaanxi History Museum, is 1.7 centimeters high, 7.2 centimeters long, only 0.5 millimeters thick, weighs about 3 grams, and is semi-circular. On the Shubei, gold wire as thin as the hair was pinched and soldered in the shape of curly grass and plum blossom on both sides of the Shubei, and a circle of gold beads as big as the size of needlepoint was set around it. This cultural relic can be called a masterpiece of ancient Chinese craftsmanship.

The ancients were just as fond of buying bags as modern people, especially in the Tang Dynasty, when society was obsessed with bags for both men and women. Cave 17 at Mogao Caves in Dunhuang, Gansu has a painting of Jinshi Nǚ (近事女), which dates from around the late Tang dynasty. The most surprising thing about this painting is that there is a very stylish satchel hanging from the bodhi tree. 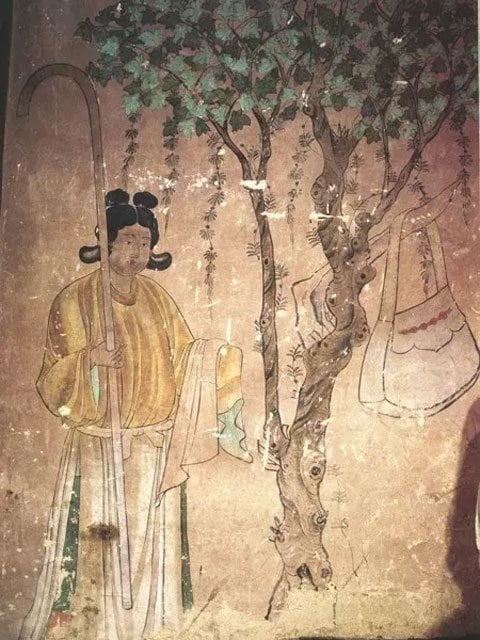 In fact, satchels appeared as early as the Han Dynasty. Tang not only women only use the satchel, but even the officials also commonly used this bag, in order to reveal their identity.

In 1960, a female figurine was unearthed in the tomb of Princess Yongtai in Qianxian County, Shaanxi Province, wearing a Hu cap, a red lapel, narrow-sleeved tight-fitting Hu clothing, small boots, hands in reins, sitting on a maroon steed, with a handsome and slender figure and a sturdy horse underneath. In the glaze treatment of the figures and horses, this figurine is different from the colorful glaze of other female figurines, the horses and figures are mostly monochromatic, simple, and bright, thus more effectively highlighting the youth and vitality of the women in men’s clothing. 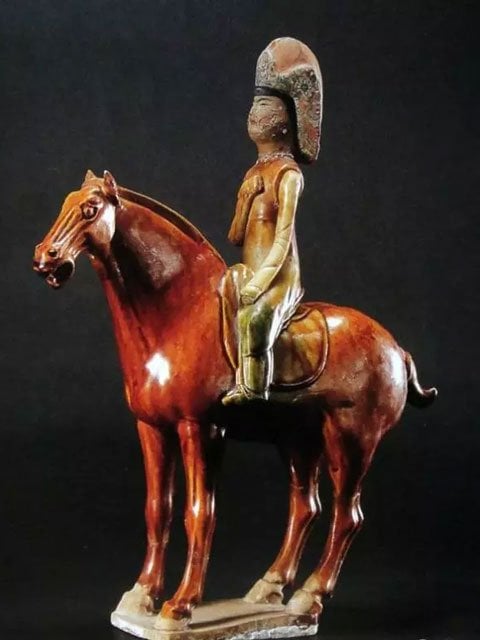 The Tang dynasty also saw the emergence of a distinctive form of Weimao (帷帽), which became fashionable for women to wear during the Tang Dynasty. The painted pottery figurines from the Astana tombs include images of women wearing Weimao. One of the terracotta women wear Weimao on horseback is made of clay, painted black on the outside, and is made of square-hole yarn that hangs down to the neck. The Weimao’s is square, arched at the top, woven of leather, felt, or bamboo vines, and covered with a black leno and other materials. 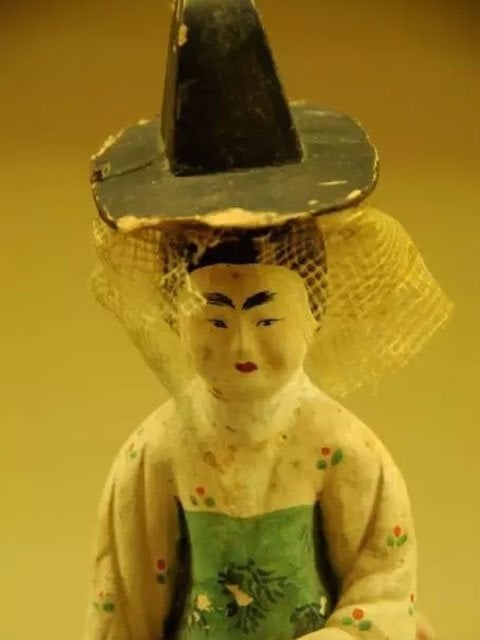 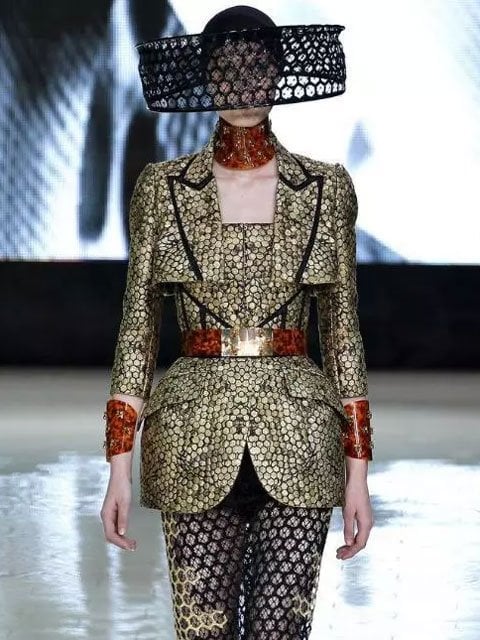 The above is about Chinese historical fashion items for Tang Dynasty women, if you’re interested in more about the history of Chinese fashion and Chinese Hanfu dress, you can check it out by clicking here. 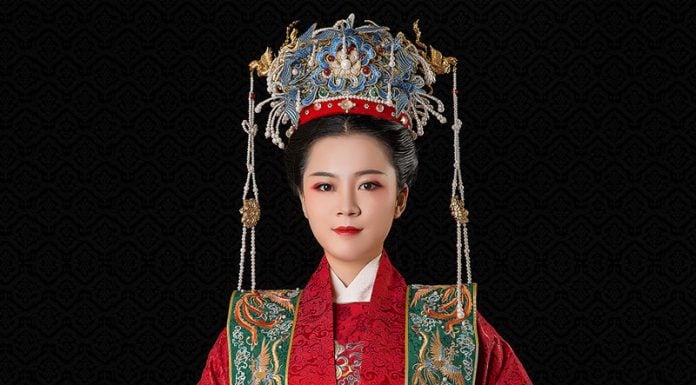