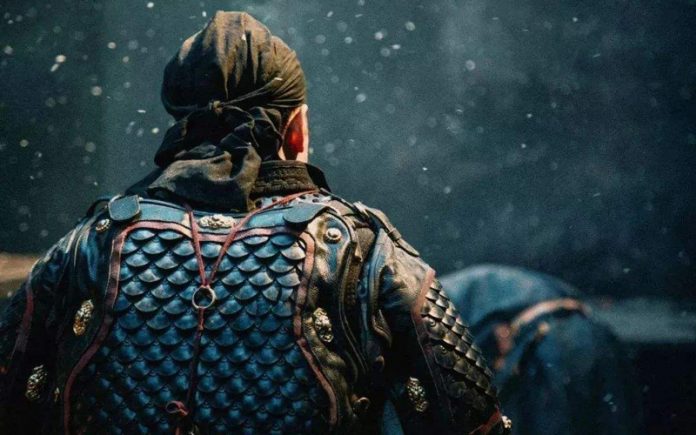 In China’s thousands of years of history, the ancient military uniform is also constantly changing according to the time. But ancient Chinese armor, due to problems with materials and preservation, few can be completely preserved to date, most can only be based on historical records and unearthed bits and pieces to speculate on research. Maybe we can see some relevant information through film and television works in our life.

In the Xia dynasty, the scale of war is not big, more than thousands of participants, less than hundreds of people, but to the Shang dynasty, the scale of war becomes larger, sometimes up to tens of thousands of people, this time for the convenience of a unified order, the uniform was born, but this time the uniform is very simple, not too much of a protective role, only to improve the command of the army deployment. The armor of the Shang Dynasty was mostly leather and cloth armor, covering important parts of the body. 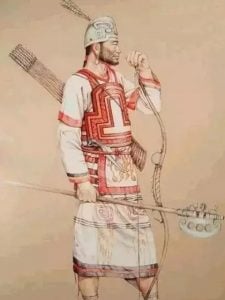 The metal was already available during the Western Zhou Dynasty, but it had not been applied to military uniforms, which at this time were just as crude, mostly cloth armor. Soldiers and commanders had the same uniforms, but the soldiers’ uniforms were shorter because they had to run. There were no generals in the army at that time, and it was usually under the direct authority of the country’s monarch. 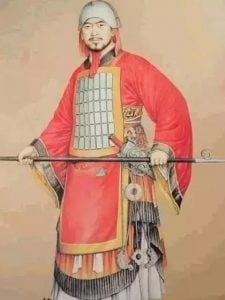 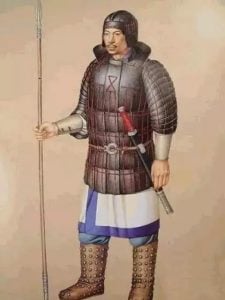 Compared to the late Eastern Zhou Dynasty, the military uniforms of the Qin dynasty had more details, such as the uniforms of different armies and different levels of uniforms, which were distinguished by headgear, shoes, armor style and pattern. 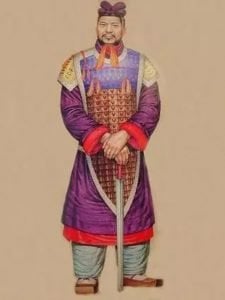 Han military uniforms as a whole were consistent with the Qin, and all Han armor was made of wrought iron. Because of the development of military theory, the military insignia that appeared during the pre-Qin period was more institutionalized. During the Western Han Dynasty, iron armor began to be equipped in large quantities, and gradually became the main equipment in the army, this iron armor was called “Xuan armor”. 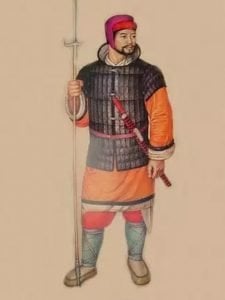 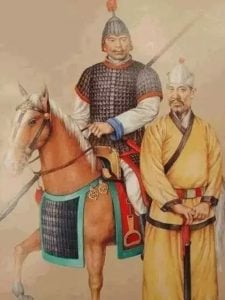 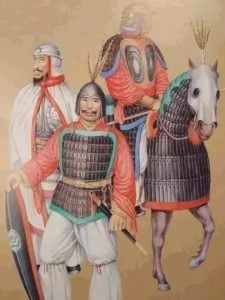 The armor of the Northern and Southern Dynasties mainly consisted of a tube sleeve armor, a Liangdang armor, and a Mingguang (bright light) armor. Wearing Mingguang armor on the battlefield, due to the sun’s rays, will emit a dazzling “bright light”, hence the name.

The Sui dynasty uses the most common Liangdang armor and Mingguang armor. The Liangdang armor is a structural improvement over its predecessors, with some minor changes in form. These improvements greatly enhanced the defense below the waist. The form of the Mingguang armor is essentially the same as that of the Northern and Southern Dynasties, except that the skirt of the legs became longer and more ornate. 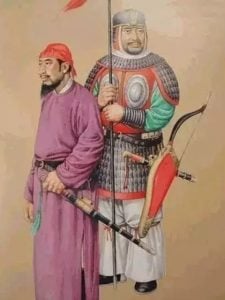 What was used in the Tang Dynasty for actual combat was mainly iron armor. In addition to iron armor, the more commonly used armor in the Tang Dynasty, there are cloth armor and leather armor. Cloth armor is armor made of a class of textiles with a silk cloth, its structure is relatively lightweight, beautiful appearance, but no defense, so can not be used for combat only as of the general’s usual clothing or battle attire. It was only after the An Shi Rebellion that the uniforms of the Tang army were changed for pragmatic purposes. 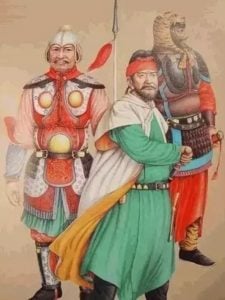 The Five Dynasties and Ten Kingdoms period was a chaotic and divisive period in Chinese history and were short-lived, so countries generally followed the military uniforms of the late Tang Dynasty. 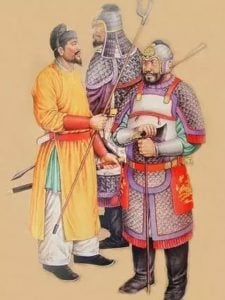 In terms of weight, the armor of the Song Dynasty in China was one of the heaviest in Chinese history.

Around 1140, the Song Dynasty army was at its strongest. Famous generals such as Yue Fei and Han Shizhong led heavy infantry with iron armor, long spears and crossbows as the main equipment, and repeatedly defeated the Jin Dynasty cavalry with dense formations. Including weapons, the Song heavy infantry load as high as 40-50KG, because the Song dynasty fewer horses do not have a large number of cavalry troops, so failed to wipe out the Jin cavalry that had been routed. 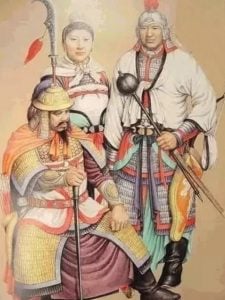 In addition to iron armor, the Liao dynasty also used leather armor. The costumes of the military officers of the Khitan tribe were divided into two types: official and regular clothes, with long, narrow-sleeved gowns with coiled collars, which were the same as those of ordinary men. 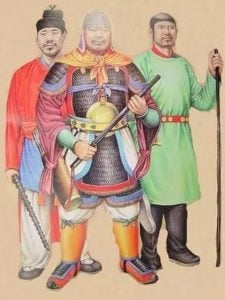 When the Yuan dynasty was founded, the military uniforms were mainly ethnic uniforms, called Zhisun uniforms (质孙服), which were tight-fitting, narrow-sleeved robes with cross collars and square collars, long and short, with the long ones reaching below the knee and the short ones only reaching the knee. Later, in order to gain support, the military uniforms were based on those of the Tang and Song dynasties. 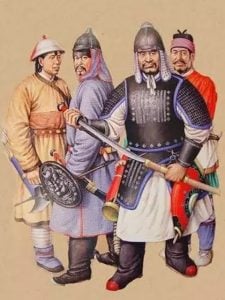 During the Ming dynasty, there was a great emphasis on military production and there was a high level of manufacture of firearms and armor during this period. The grade is also very obvious, military uniforms are mostly red.

The knight wears a Duijin style armor, in order to ride the horse. The shape of the armor was usually in the shape of “山”, which was precise and light to wear. 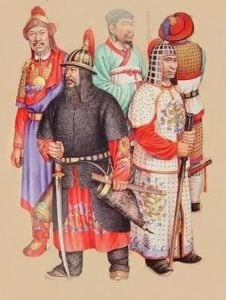 In the early Qing dynasty is the Ming dynasty combat time, the uniform is steel armor, but with the application of firearms more and more mature, armor in the late Qing dynasty has been as a kind of decoration, only in parades or major celebrations when wearing. 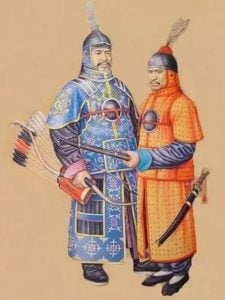 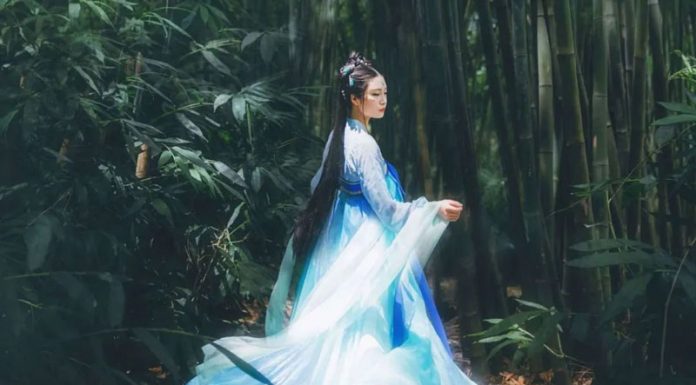 How to Take Care of Your Hanfu (Clean & Storage)

What did the Tang Dynasty wear? | Chang’an Twenty-four Hours